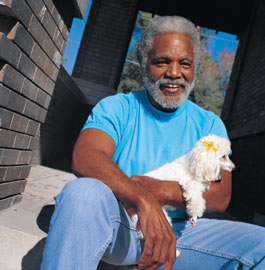 For the past 25 years of my life I’ve been told I need to fear terrorism more than anything else. I’ve been told that if it wasn’t for constant war in the Middle East, there’d be men in robes roving the cities in the back of Toyota pickup trucks, wearing vests of ammo and taking pot shots with their AK-47s. This is the justification used to grope children’s genitals at the airports and steal our thoughts via the largest spying apparatus earth has ever known. However, since the planes flew into the trade towers on 9/11, most of the organized violence committed in this country is not at the end of a Kalashnikov, but at the barrel (and often the butt) of a military surplus rifle in the hands of the police.

Chambers, an independent, has served 40 years in the Legislature. He is no stranger to calling it as he sees it. In fact, his political career was born after protesting his termination from the post office for speaking out against management referring to black men as “boys.”

First elected in 1970, Chambers was re-elected in every election through 2004. In 2005, Chambers became Nebraska’s longest-serving state senator.  He was barred from re-election in 2008 due to a constitutional amendment passed in 2000 limiting Nebraska legislators to two consecutive terms. The amendment, however, permits senators to seek re-election after sitting out for four years.

Chambers ran again in 2012 and won by a landslide. At 77 years old Mr. Chambers has lived through some quite tenuous times in American history. He’s lived through the “legal” segregation of schools (most are still quite segregated) and the lynchings, Bloody Sunday, Rodney King etc. So now after 3/4 century of hearing horror stories and seeing still pictures of police brutality, he gets to see new videos, multiple times per day, of police terrorizing, beating, and murdering Blacks and Whites alike. This history seems to have made an impact on his statements during a recent political discussion.

At about 50:00 minutes into this video (embedded below), Senator Chambers responds to a proposal to allow off duty cops (and others) to carry concealed guns in schools.

Chambers states during his response to a gun rights supporter: “My home is not threatened by ISIS, my home is threatened by the police. The police are licensed to kill us, children, old people…Nobody from ISIS terrorized us as a people as the police do daily and they get away with it.” He goes on to say, “If I was going to carry a weapon, it wouldn’t be against you, it wouldn’t be against these people here that I might have a dispute with, mine would be for the police.” He notes that all a cop has to do, regardless of video evidence in most circumstances is say “I was scared.” Chambers proposes citizens also be given the benefit of the doubt when protecting themselves from police terrorism. He then makes a jovial statement; “They better hope I never lose my mind and find out I’m on my way out of here.”

Mr. Chambers cites the recent Dontre Hamilton execution from Milwaukee where Officer Chris Manny shot him 14 times after Hamilton was awakened and illegally searched. Manny appealed his firing and requested his job back, while also asking for permanent disability due to PTSD related to the murder. But this is hardly the only case of it’s kind he could have mentioned. Milwaukee police have been torturing and murdering people for a long time.

Chambers also cites the incident where a CHP cop mercilessly ground and pounds an older black woman on the side of a California highway. California Highway Patrol Trooper Daniel L. Andrew agreed to resign (and likely draw a massive pension) in accordance with a 1.5 million dollar settlement. He walks away set for life after he tried to beat the life out of Marlene Pinnock. All things considered, if that were my mom being beaten like that, I expect a good armed citizen would dispatch the attacking animal.