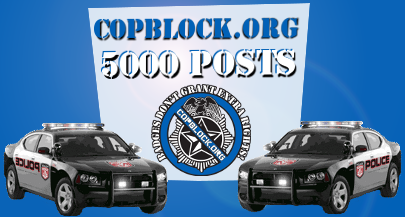 That’s right, this is blog post number 5,000 at CopBlock.org, WOW! In January of 2010 when I decided to launch this website, I would have never imagined that CopBlock – the idea that, “Badges Don’t Grant Extra Rights” – would grow to be what it’s today. At this time there are nearly 200 CopBlock offshoots – click here to visit the CopBlock Groups page, nearly 1.5 million people like CopBlock’s Facebook page (that nearly doubles any law enforcement page) and, with the recent launch of the CopBlock Network, none of this seems to be slowing down either. Sadly, the police are probably the biggest reason for CopBlock’s growth, without the supply of bad cops there would be no demand for accountability but I want to keep this post positive.

Taking a moment to reflect on the last five years I found myself scanning Google Analytics and reminiscing as the top viewed post displayed on the screen. I figured since I’m not very good at writing accomplishment pieces – because I rarely take time to celebrate milestones, I just move on to the next thing – I figured sharing a little peice of the top three “most viewed” posts published at CopBlock.org over the last five years would make a nice post for number 5,000.

#1: HOW TO BEAT A PHOTO-ENFORCED SPEEDING TICKET

With nearly half a million views this article by Nathan Cox, founder of Virginia Copblock, has probably helped more people beat a photo-enforced speeding ticket than any lawyer for hire – no joke. From the original post:

Last year I received a letter in the mail from the Washington D.C DMV claiming I was speeding. As you can see it was one of those Photo-Enforced Speeding Tickets and they had multiple pictures of my CAR. I knew better to just submit and pay a fine like the majority of people do in this country, unfortunately. I am in the habit of not taking “plea deals”, and I am always in the habit of fighting my tickets and NOT pre-paying them so I don’t have to go to court – like many folks do. I just about always record my interactions with the police, whether it’s a traffic stop or not, that way it keeps the entire situation objective, transparent and I can hold the public servant accountable if he/ she violates my rights.

Racking in nearly 300,000 views in the first year of CopBlock.org existance, the Great Anti-Prohibition Animation is one of my personal favorites. This was back in the day when CopBlock contributors were few, at that time it was just Pete, George, Brett, Dr. Q (who published this post) and myself. So there wasn’t a full write up to this story, and it didn’t need one, the video speaks for itself.

#3: WHEN SHOULD YOU SHOOT A COP

Coming in third, which is still a hell of a feat considering the topic, is Larken Rose’s essay, “When Should You Shoot A Cop.” A post that got notable attention from media and LEO’s as well. This post was shared at Occupy Protest, amongst Police Fusion Centers and mentioned on airwaves across the country. I recall fielding questions about post for nearly two years, in fact, it still happens from time to time. Larken is a personal friend of mine and his book, “The Most Dangerous Superstition” really helped me to solidify my philosophy and the ability to articulate it. I believe anyone who actually reads his work will have a difficult time poking any holes in it, it’s simply the most logical writing I’ve ever read. Yet, I’ll let you decide, from the above mentioned post:

Pick any example of abuse of power, whether it is the fascist “war on drugs,” the police thuggery that has become so common, the random stops and searches now routinely carried out in the name of “security” (e.g., at airports, “border checkpoints” that aren’t even at the border, “sobriety checkpoints,” and so on), or anything else. Now ask yourself the uncomfortable question: If it’s wrong for cops to do these things, doesn’t that imply that the people have a right to RESIST such actions? Of course, state mercenaries don’t take kindly to being resisted, even non-violently. If you question their right to detain you, interrogate you, search you, invade your home, and so on, you are very likely to be tasered, physically assaulted, kidnapped, put in a cage, or shot. If a cop decides to treat you like livestock, whether he does it “legally” or not, you will usually have only two options: submit, or kill the cop. You can’t resist a cop “just a little” and get away with it. He will always call in more of his fellow gang members, until you are subdued or dead.

I still can’t believe this is the 5,000 post. That’s an average of 2.7 post per day and nearly 1,000 per year… all from an website that’s been primarily run by volunteers and their pure passion for the cause. Hopefully we don’t make it to 10,000 post or another five years, I hope by then the police state will just be a memory by then. I know, it’s my dream but if the police state is still rampant than CopBlock will continue to expose it.

If you’d like to partake in CopBlocking activities, visit the resources tab where you’ll find information on how to start a group, film the police and additional know your rights information, together we can make a difference. Until next time, remember that, “Badges Don’t Grant Extra Rights.”