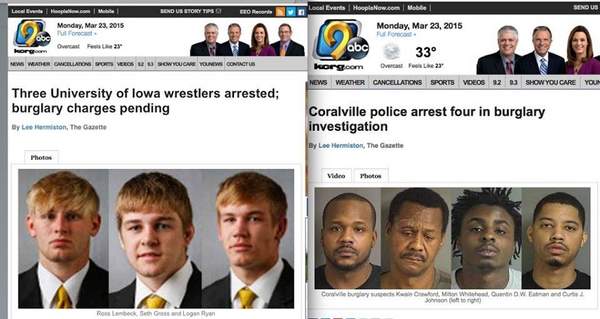 Recently some Iowa news sources were accused of racism as the result of photos they published in their criminal reports. The photos show two groups of men involved in a burglary, one group all white and the other all black. While both groups of men committed the same crime in the same jurisdiction, the photos published by these sources show school photos of the white men while mugshots are used for the black men. Several websites have reported on the seeming disparity and latent racism involved in the decision to publish these photos.

However, the news sources have claimed that the difference can be explained by more practical matters. Adam Carros, news director for the company which owns the television station and newspaper which displayed the photos, explains these differences in a pretty satisfactory manner. His defense is that mugshots require retrieval and permission which is only done when another verifiable recent photo of the accused is not readily handy. The young white men are wrestlers for the University of Iowa and it is quite simple to find pictures of them online. Such photos did not exist in the case of the black men, Carros claimed. Well, I did the research myself. I quite easily found photos of the young white men at the UofI website and on social media. However, I was only able to find one photo of the black men who were arrested. And I think it is pretty obvious why this photo would be more problematic than a mugshot. I think that Carros’ story checks out. Whether or not Carros, his employer or Johnson County, Iowa law enforcement is racist cannot be determined by this incident.

However, I just happen to be from the Iowa City area where this took place and I can tell you that without a doubt, law enforcement officers as well as prosecutors and the courts display obvious racism in their activities. Under the direction of Prosecutor Janet Lyness and her predecessors, Johnson County has one of the highest disparities of per capita arrests and convictions of black men, especially for victimless drug-related crimes.

Last fall Lyness was challenged by a former pastor who upended his entire life to obtain a law degree and use it to create justice and equality. His platform was to stop prosecuting most victimless crimes so that police would be forced to stop making so many arrests. He also promised to monitor racial disparities that led to such a high national rate of unequal arrests of black men. He was unable to beat all of the money behind Lyness from fearful and latently racist and classist local elites. His name was John Zimmerman, and he unfortunately did not return my request for an interview, although when I spoke with him in the past he was a genuine and caring man who I learned had sacrificed a lot personally to make a difference in our community. I would urge other young people seeking legal careers to follow his lead and obtain prosecutor positions in our system and begin to break down the compulsive enforcement and convictions of victimless crimes.

Mostly I am certain that such racism exists because I have witnessed it first hand. I have lived in a few predominately black neighborhoods and many times witnessed law enforcement officers harass young black men who they did not know and who were committing no minor social infractions, let alone crimes. Even though Iowa City/Coralville is a surprisingly ultra-liberal oasis in a somewhat conservative state, due to it being a college town and hub of cultural happenings, there exists a lot of racism in the legal systems which govern it. The story of how a highly educated, liberal and open-minded town in the midwest came to foster such institutionalized racism is a long and difficult one. During the late nineties the nearby city of Chicago began closing projects and cutting off public welfare programs. Iowa City at the time had an excess of wealth being generated for such programs. This made Iowa City an enticing place to relocate for black people leaving a city which had long ago abandoned them. It was also a boon for local contractors, landlords, social welfare workers and administrators as well as policing agencies. The growth of the black population created a lot of jobs. At the same time, it brought a strange and unfamiliar culture, as well as the criminal history acquired by those who had been living in Chicago’s failed housing projects for a few generations or more. Where liberal-minded Iowa City people with status and influence had only seen job creation and an opportunity to reach out to disenfranchised black people; they soon noticed that things were not going as smoothly as they hoped. As crime and violence began edging up, so did their fears, and in response so has the size and aggression of local law enforcement. I live in a place that struggled so much to appear welcoming of racial diversity that it created conditions with consequences these people did not foresee, that led to racism and disproportionate arrests of black people.

The criminal history and culture that we were unprepared for itself has a long and complex story behind it. One in which those housing projects and welfare systems in large cities created impossible conditions for black men and women and led to desperation and a sort of urban survival criminality. Many of the things that contributed to those problems were repeated in Iowa City. Housing and welfare were readily available, but many more important opportunities were not. There was no abundance of plentiful jobs for unskilled workers, at least not steady and stable ones outside of the service industry. What was available was of low pay and satisfaction, not hardly an inviting situation for long term stability. No wide scale job training programs exist to prepare urbanites for assimilation into our labor market.

Iowa City was full of more handouts than hope, a situation which has not helped the community or any of it’s members. And yet to even mention the complexity of the issue locally is to invite accusations of racism. I am almost certain that despite the fact that I am currently writing an article which claims that racism does exist locally and should be explored more deeply, I will face a myriad of criticisms, misconstruing interpretations and be subjected to ‘more-non-racist-than-thou’, which is a popular yet infuriating local sport. It is also a distraction and obstruction from conversations needed in order to create solutions to the problems we are too ashamed to admit.

I do not think the difference in photographs was illustrative of racism. But it does incite a sort of underlying angst we face about our institutionalized racism and cultural clashes. Because that racism does exist, it becomes easy to find it in anything and everything. Even where it does not exist. Unfortunately, blame and a crossfire of counter-accusations is far easier than the much more difficult dialogue necessary to begin sorting this mess out for the benefit of all races; as well as harmony and institutional equality amongst them.

And I am certain that this same problem is happening in many other places in very similar manners. We face a history of institutionalized racism, failed social and economic policies and cultural differences which are creating a new face of racism which is visible by a mere glance behind prison walls and in the alarming amount of blacks being killed by police. You don’t have to go looking for racism everywhere, just follow your tax-dollars, politicians and policies and it will present itself.