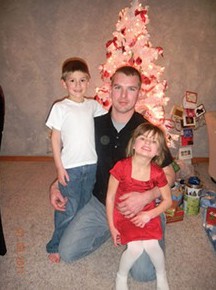 A man named Dan Ficker was murdered on his front lawn by one off duty and one on duty Cleveland cop after the off duty, Mindek, called his fellow officer, Craska, to go after Dan for supposedly stealing jewelry- I blogged about it here. Dan’s girlfriend is related to Mindek’s wife. They were at a 4th of July party at Mindek’s house earlier in the evening.  When the theft allegedly occurred. The two thin blue liners ignored priority calls in Cleveland to execute this vendetta against Dan. Craska ended up murdering Ficker on his front lawn based on Mindek’s accusations.

Rather than admit the wrong doing and offer some form of apology to the Ficker family, they motioned to have the Dan Ficker civil suit, brought forth by Dan’s family, dismissed. A judge ruled not to dismiss the civil suit. This is a pale attempt to shirk responsibility for the murder from an already corrupt department. Dan’s case is one of the many that make up the scathing Department of Justice report on Cleveland police released earlier this year. With that being said, you’d think the city would be a little more humble, but not Cleveland. The Cleveland police union continues to spit in the faces of the many victims of police brutality throughout the Greater Cleveland Cop Block Area. They refuse to acknowledge that there are murderers in the ranks.

The worst part of this story is that Craska and Mindek were allowed to return to work where they most likely continued the behavior that got them acquitted of murder. At least in this case. I’m not sure which but one of them is retired now and will have to live with what he has done. This of course offers no comfort to the family of Dan Ficker. Thankfully this is not the end of the case. The civil suit will continue, and most likely cost the citizens of Cleveland millions in settlements. These officers will of course, not be liable for any of it.