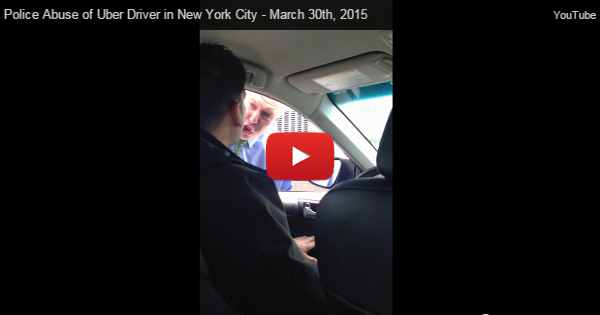 Earlier this week I blogged about the video, that has now gone viral, showing an unknown – at the time – NYPD officer verbally harassing a UBER driver. It’s now known that this officer’s name is Patrick Cherry and William Bratton, the NYPD Commissioner, has stripped Cherry of his gun and badge. According to Vice.com:

The officer involved, identified as Patrick Cherry, is also a member of the FBI’s top-secret Joint Terrorism Task Forces (JTTF) — an elite, multi-agency team headquartered in New York. Bratton told reporters Wednesday that the department has placed Cherry on modified duty and taken him off the task force. The officer was also required to surrender his gun and badge, according to the New York Post.

“I want to extend an apology to the driver of that vehicle and the two passengers in that vehicle for the behavior of that officer,” Bratton said at a press conference. “That officer’s behavior reflected poorly on everyone who wears our uniform.”

Bratton, who said the detective was on duty at the time, issued an apology to the driver and passengers.

I’m pretty shocked to see such a reaction because we’ve all seen way more egregious actions by police caught on video where nothing was done. Eric Garner is probably the best example since it took place in New York City too but, unlike the Uber incident, Bratton didn’t take Daniel Pantaleo’s badge or gun. Instead he order a three day retraining period for all officers regarding choke holds.

I wonder why the double standard? Why did Bratton choose to take Cherry’s badge and gun but not Pantaleo’s? Personally, I believe neither should have a badge or a gun, but Pantaleo killed a man and Cherry did not. Bratton said, “That kind of anger like that is unacceptable in any encounter; discourtesy like that and language like that is unacceptable. That officer’s behavior reflected poorly on everyone who wears our uniform” but must view choking a person to death over voluntarily selling people cigarettes as ‘acceptable.’ Atleast that’s what we’d have to assume by his actions, right?

Earlier today my blog post titled, “Not All Cops Are Bad? Or Are They?” was published and relates to these events above. Is Bratton a good cop? Is Cherry a good cop? Read the post here and determine for yourself.