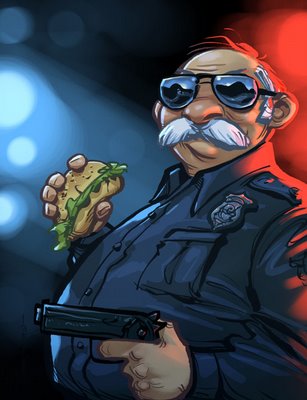 Holy cow! Pull up a seat — This week’s corrupt cops stories rogues’ gallery is going to take awhile to get through. We’ve got jail guards, FBI agents, deputies, internal affairs officers, a deputy police chief, even a judge. Let’s get to it: In Fresno, California, the Fresno deputy police chief was arrested last Thursday as part of a federal drug conspiracy investigation. Deputy Chief Keith Foster, 51, went down after a year-long undercover investigation by the FBI and BATF. Few details are known except for the charges: possession and distribution of heroin, oxycodone, and marijuana. He has been placed on administrative leave.

In Chattanooga, Tennessee, a Catoosa County sheriff’s deputy was arrested last Thursday after an acquaintance called police to say he had stolen prescription drugs from him. Deputy Joshua Wilson is charged with possession of hydrocodone and tramadol, unauthorized distribution of a controlled substance, and violating the oath of an officer. He had the drugs in his vehicle when he was pulled over in a traffic stop.

In Prescott Valley, Arizona, a former Prescott Valley Police commander was arrested last Thursday on charges he was stealing drugs discarded by the public as part of a drug take-back program. Commander Arthur Eskew, a 20-year veteran, resigned in January after a motion-activated still camera and hidden video camera in the evidence room caught him pocketing pills. Now he faces criminal charges, although exactly which charges haven’t been specified.

In Huntsville, Tennessee, a former Scott County sheriff’s deputy was arrested Tuesday for allegedly breaking into the evidence room and stealing drugs. Cody Scott Yancy, 25, is charged with three counts of burglary, theft under $500, possession of burglary tools, official misconduct, tampering with evidence, and two counts of vandalism under $500. He was fired after an investigation into the thefts last fall.

In Miami, a former NYPD officer pleaded guilty last Friday to traveling to Florida and providing security for a $200,000 cocaine deal that turned out to be a federal drug sting. Phillip LeRoy, 28, copped to one count of drug trafficking conspiracy. He’s looking at 10 years to life in federal prison.

In Washington, Pennsylvania, a former state court judge pleaded guilty last Friday to stealing cocaine that he had ordered police to keep in his chambers instead of the evidence room. Former Washington County Judge Paul Pozonsky copped to theft by unlawful taking, obstruction of the administration of law, and misapplication of entrusted property. In return, prosecutors dropped one felony and one misdemeanor count. Pozonsky supposedly took the drug for his own use. He’s looking at up to two years in jail when sentenced in July.

In Washington, DC, a former FBI agent pleaded guilty Monday to charges related to stealing heroin from evidence bags. Matthew Lowry, 33, admitted stealing the smack and using it himself, as well as trying to replace it with other substances and falsifying records to hide his misdeeds. He said he had been strung out on pain pills. He copped to 38 counts of obstruction of justice, 13 counts of conversion of property, and 13 counts of heroin possession. As a result of Lowry’s hand being in the cookie jar, prosecutors have had to throw out dozens of drug cases.

In Las Cruces, New Mexico, a former Dona Ana County jail guard pleaded guilty Tuesday to plotting to distribute heroin, cocaine, and meth within the jail. Francisco Balderrama, 27, copped to conspiracy to distribute narcotics and providing contraband in a prison facility. He’s now looking at up to 20 years in federal prison.

In Miami, a former Miami-Dade police internal affairs lieutenant pleaded guilty Tuesday to working with cocaine smugglers to smuggle guns through airport security. Ralph Mata worked in the department’s internal affairs division, but helped cocaine smugglers get guns through Miami International Airport. He also helped plot the execution of two rival drug dealers, provided secret intelligence to the group, and suggested ways to better smuggle dope through the city. He copped to three counts, including aiding and abetting a narcotics conspiracy and is now looking at 10 years to life in a federal prison.

In Birmingham, Alabama, a former Winston County sheriff’s deputy was sentenced last Friday to nearly four years in federal prison for threatening a woman with an arrest warrant unless she agreed to cook meth for him. Grady Concord, 42, also supplied the woman with the precursor ingredient pseudoephedrine, which he stole from the department evidence room. He copped to one count of manufacturing meth on a premise where children were present.

In Bridgeton, New Jersey, a former Bayside State Prison guard was sentenced Tuesday to seven years in state prison for selling drugs to inmates. Nazir Bey, 30, was found guilty by a jury of second-degree official misconduct for selling heroin to an inmate at the prison.

In Titusville, Florida, a former Titusville police officer was sentenced Tuesday to 10 years in federal prison for arranging drug deals. Richard Irizarry, a five-year veteran of the force admitted to giving out information on his department’s drug investigations to traffickers in return for cash. He was convicted in January of attempting to aid and abet the distribution of cocaine, possessing a firearm in furtherance of drug distribution, and using a telephone to facilitate drug distribution.