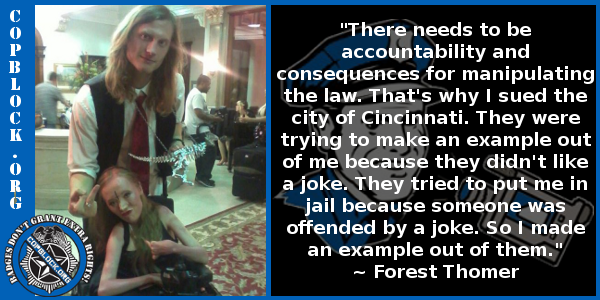 In May of 2012, Forest Thomer ll from Cold Spring, KY, was at an event, “Party in the Park” in Ohio, produced by the Cincinnati USA Regional Chamber to help his long-time friend and comedian, Ally Bruener, who has been in a wheelchair since she was a young child because of Muscular Dystrophy,  with her performance at the event. As part of her comedy act, she wanted to involve the audience. Forest went around the park asking for volunteers to “laugh at the crippled girl”, then pointing to her so she could make a joke and promote her act that the day , future venues, and her website.

According to documentation, a chamber of commerce representative sought out Cincinnati PD officers, Daniel Kreider and Ronnie Hugle. The two proceeded to tell Thomer he needed to leave the park. When asked by Thomer, he was given no reason why. Thomer began recording the interaction. The two officers then proceeded to take his camera by force, destroy it, and threaten to tase him. He was arrested on the spot, with the city citing “Grossly Abusive Language”, but then changing it to “Unreasonable Noise” after the prosecution admitted to seeing a Freedom of Speech issue with the first allegation. According to charge, the city prosecutor stated that Forest had been “shouting obscenities”, although no witnesses were found to back up the allegations.

Forest was found “not guilty” in court,  and in June of 2013, his attorneys filed a federal law suit against the city of Cincinnati, OH and the two arresting officers for False Arrest, Violation of Free Speech Rights and Malicious Prosecution. On February 4,2015 the case was settled for $25,000 from the city to Mr. Thomer.

In a statement to copblock.org  Forest said,

I do what I do because it needs to be done. People are afraid to celebrate freedom, people are afraid to be Americans and pursue their passions and ambitions in life. People are afraid to voice their opinions, and I’m tired of being afraid, I’m tired of being told to be afraid, I’m tired of fear and insecurity being pushed as the law, as justice by individuals/police, and a system that has lost sight of why it exists in the first place. I’m tired of being told what I can’t do. There needs to be accountability and consequences for manipulating the law. That’s why I sued the city of Cincinnati. They were trying to make an example out of me because they didn’t like a joke. They tried to put me in jail because someone was offended by a joke. So I made an example out of them.
When making jokes that harm no one suddenly becomes a ‘crime’ because it offends a person, but having kids in our local schools that don’t have access to proper educational tools is ‘okay’, when it’s ‘okay’ to give a person a ticket for exercising free speech…I believe that reflects on bigger issues within our culture that need to be addressed. That is why I do what I do.

Thomer’s attorney, Tim Burke, took depositions of the police before the case was settled and they said, under oath, they were kicking Thomer out on orders, but not from law enforcement.

“They were told, essentially by representatives of the Chamber of Commerce, to get him out of there,” Burke said, “but they did it using their municipal powers.”
When Thomer tried to record on video the officers questioning him, they seized and broke his camera and threatened to shoot him with a Taser.
“That occurred only about a year after a (Congressman) Steve Chabot public event” where a Cincinnati police officer improperly seized the camera of an audience member, an event that result in officers being told they can’t seize cameras.The settlement states, “The (city, prosecutors and police) recognize that all citizens have a right to photograph and film police officers engaged in the performance of their duties.”

This post was submitted by Forest Thomer ll via the CopBlock.org Submissions Page