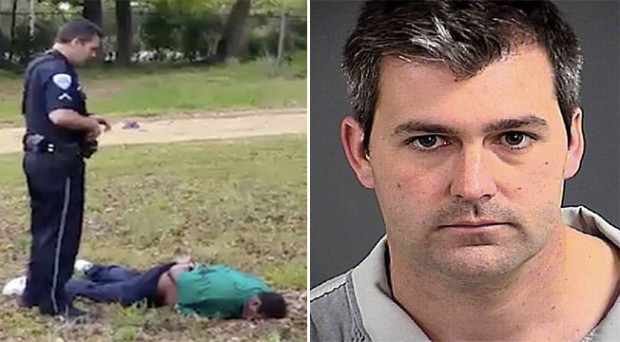 In a surprising turn of events, North Charleston police officer Michael T. Slager has has been charged with murder for the homicide of a suspect while on duty.

A video filmed by an anonymous bystander depicts an interaction between Slager and the victim, Walter Scott. The video depicts Mr. Scott struggling briefly to free himself from Slager’s reach. He seems to be slapping Slager’s arm away or knocking something out of the officer’s hand; he then quickly turns to run away. As he is running with his back toward Slager, Slager immediately draws his weapon and begins firing in rapid succession. When Slager starts firing, Mr. Scott is probably more than 15 feet away. Slager fires 8 times, killing Scott. Mr. Scott’s family reports he was hit five times – four times in the back, and once in the ear.

The anonymous bystander is silently filming the entire incident while standing at a distance, unbeknownst to Slager. The bystander remains quietly hidden (with the exception of an occasional utterance of swear words), and his video reveals the cold-blooded and calculating manner by which a police officer attempts to get away with murder. Eerily, the almost seamless way in which Slager approaches the murder scene he has just created suggests he was acting per protocol and training.

Slager looks over his shoulder, appears to survey the area (perhaps for witnesses), and calmly approaches his victim while reporting “shots fired” over the radio. He then loudly orders Mr. Scott, or likely his lifeless body, “put your hands behind your back!” and handcuffs the victim, who by this time is unresponsive. Slager jogs back to where the altercation first escalated some distance back, picks up an object that had fallen on the ground, possibly his own taser, then eventually drops it next to Mr. Scott’s dead body, ostensibly to corroborate what would be the typical defense – that the victim attacked him, and caused him to fear for his life. Another officer arrives toward the end of the video (more from Photography is Not a Crime here).

After the fact, Slager reported he pulled Scott over for a broken brake light, but Scott attempted evasion and Slager pursued him on foot. Slager claimed in the confrontation that ensued, Scott got a hold of his taser, and Slager thus fired at Scott in self-defense, because he “felt threatened.” (See more at The Post and Courier).  Police reports claim officers performed CPR and administered first aid to the victim, while the video merely depicts a couple of half-hearted attempts by officers to check for a pulse (more from the New York Times).

This is how police behave when they’ve killed someone, and they don’t think anyone is watching. If this video had not been released for public viewing, it might appropriately be entitled, How To Commit Murder And Frame The Victim While On Duty.

The video footage was obtained by the Post and Courier, but the source wished to remain anonymous. This is probably a wise choice; people who engage in whistleblowing against police crimes have a tendency to run into bad situations. For instance, Ramsey Orta, the man who famously filmed the fatal NYPD choking of Eric Garner, was coincidentally charged with two counts of weapons possession just weeks after he released the video. Similarly, New Albany police officer Laura Schook was fired for “improper conduct” after she alleged racism, illegal practices, and corruption in the department (see here and here). Another police officer, Craig Matthews, sued the NYPD because he was retaliated against for blowing the whistle on street stop quotas in his precinct. Thus, if one is in the position of revealing police corruption or abuse, it’s best to stay unidentified.

After the video was released, Slager’s attorney dropped him as a client (apparently, not all police officers have a conscience, but some lawyers do).

The Mayor of North Charleston, Keith Summey, characterized Slager’s actions as a “bad decision,” which of course might be the understatement of the year. A “bad decision” is having one too many beers on Friday night or giving that creepy guy at the bar your actual phone number. Usually, shooting someone in the back 5 times as they are running the hell away over something as petty as a broken brake light would warrant descriptions of a bit more gravity.

The U.S. Department of Justice issued a statement indicating FBI investigators would work with state law enforcement in South Carolina to investigate police shootings and civil rights violations in connection with Mr. Scott’s death. So far, the government’s response has been about as good as one can expect of such an institution (which isn’t saying much).

This is nothing to cheer about, as murder charges mean little when it comes to police officers. Granted, they probably do not get charged with murder with the same frequency as ordinary people in similar situations, so the fact a murder charge of some sort was even filed is progressive in a sense. Even so, the story of the fatal beating of Kelly Thomas by six Fullerton police officers is as instructive as ever. One of those officers, Manny Ramos, famously sneered, “These fists are going to fuck you up,” before proceeding to beat Mr. Thomas to death. He faced no more than a second-degree murder charge, and was acquitted by the jury (more here).

It is not merely people in positions of power in the system to blame, as the choice to acquit the two monsters who beat Kelly Thomas to death was entirely in the hands of the jury. Even when murder is committed on video, prosecutors are hesitant to prosecute, judges are hesitant to judge, and jurors are loath to convict. American police have killed more people in the month of March this year (over 100) than United Kingdom police have killed in the last century. When police in Iceland shot someone (who was shooting at them, by the way) for the first time in 2013, they expressed regret and condolences to the deceased’s family. American police are devaluing peoples’ lives like a cheap and poorly written Hollywood action movie, yet American people remain largely unwilling to acknowledge the deep-rooted problems in the justice system.

Officer Slager’s situation will be no different. Ultimately, it will be of no moment that he shot a man multiple times in the back while he was running away over a broken brake light. It will be of no importance that the video shows him blatantly behaving like a murderous psychopath in the process of covering up a crime. People need their heroes, even if those “heroes” are ruthless killers, and they will engage in a baffling amount of mental gymnastics and rationalization to preserve that fantasy at the expense of reason and morality.