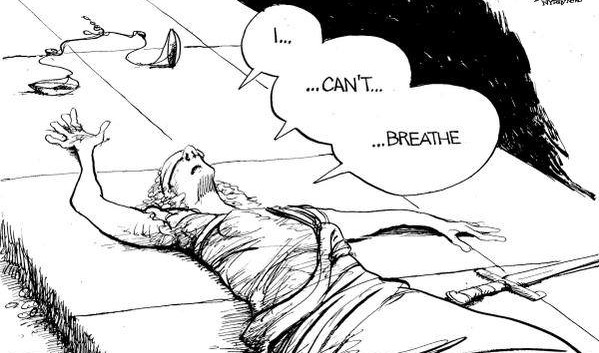 The lawsuit says 60-year-old Michael Sollitt Kinney, who is a diabetic, was driving on Phoenix Road on July 7 at about 11:30 p.m. when Officer Zach Hathaway attempted to pull him over for “driving erratically.”

“During the course of Hathaway’s pursuit, [Kinney] was tailed closely and aggressively until [his] vehicle was forced into a ditch and culvert,” the lawsuit states.

The suit says Sgt. Natalie Thompson and Officer Michael Kirsch were also on hand and began shouting commands for Kinney to stop moving inside his vehicle.

When he continued to squirm, Kirsch and Thompson unbuckled Kinney’s seat belt and “aggressively” pulled him out of the vehicle, the lawsuit says.

Kinney claims that even though he didn’t resist, the officers then placed him in a choke-hold and shoved his face into the gravel.

The lawsuit says the officers were “yelling and verbally abusing” Kinney and calling him a drunk before he pulled out his diabetic warning tag and showed it to the officers.

Paramedics arrived on scene and took the man’s blood sugar reading that indicated a level of 52.

At that point, two tubes of glucose were administered to Kinney, who told police it would take up to a half hour for his blood sugar to rise to a safe level. The lawsuit says that Kinney took a preliminary breath test and tested negative for alcohol.

Kinney was handcuffed, placed in the back of a police car and taken to South Haven Health System by Hathaway where doctors determined his medical emergency was severe enough for him to be admitted to the hospital and that it would be unsafe for him to be taken to the jail.

In March 2014, Kinney underwent surgery but doctors were unable to repair his vocal cords, the lawsuit claims.

The lawsuit accuses the officers of excessive force, failure to intervene, unreasonable arrest, assault and battery and false imprisonment.

South Haven Police Chief Martin said in a statement Tuesday: “At all times the SHPD officers were acting under the color of the law and were compliant with all departmental policies and procedures.”

Police reports of the incident make no mention of Kinney being choked by officers or being shoved to the ground.

Kinney was arrested for fleeing and eluding but the charges were latter dropped. The lawsuit was filed late last month in U.S. District Court in Grand Rapids.

Since the killing of Eric Garner in New York last year, police use of choke-holds have been a point of growing controversy across the nation. Medical professionals say a choke-hold can be fatal after just 10 seconds.