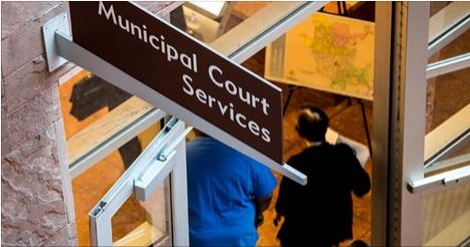 The Las Vegas Review Journal is the latest media outlet to point out the already painfully obvious tendency toward revenue generation that law enforcement has degenerated into.  Citing current and ex-employees, as well as lawyers and people that have been defendants within the court, the LVRJ states in a recent article:

“It’s a question of priorities.

They contend the court’s “money hungry” approach to misdemeanor warrants prioritizes revenue collection above public safety and pressures marshals to take a credit card payment in lieu of locking up violent offenders.

Staffers say this collect-at-all-costs mentality tends to place a heightened emphasis on traffic ticket revenue — a practice that disproportionately harms poor, often minority defendants more likely to wind up in jail for failure to pay a speeding or fix-it ticket — all while leaving much more serious offenders on the street.

They blame those practices on a pair of top city managers, administrators they say have created a culture of “coercion” to better fund Las Vegas’ courts….

Law enforcement authorities…also have been accused of plundering vulnerable residents — most recently, in Las Vegas’ case, as part of a class action lawsuit that claims the now-disbanded Las Vegas constable’s office engaged in the ‘illegal shakedown’ of newcomers to the area.” The reference to the “illegal shakedown” by the constable’s office (which was actually dissolved due to the constant scandals and corruption within it) refers to their practice of charging new residents a $100 fee as “compensation” when they issue tickets for having not changed their license plates, even if they later prove that they were within the 30-day window allotted to do so (a law which itself was modified to shorten the time allowed and quadruple associated fines, based purely on a desire to increase tax revenue). This led to constables (who personally received $65 of that fee) spending most of their time driving around apartment complexes searching for cars bearing out of state license plates.

(The photo to the left is one I took of the armored truck that they drive up to the front door of the Regional Injustice Center in Las Vegas every morning to haul away all the cash they take in.)

The Review Journal article also goes on to explain how the focus on collecting revenue creates an unofficial quota system and leads to favoritism toward those that pad the Las Vegas Municipal Court’s budget within the Las Vegas Marshal’s office:

“Former Las Vegas Marshal Richard Kilgore said a lot of the work of some of his former colleagues amounts to nothing short of ‘extortion.’

Kilgore said the court rewards those who bring in the most money, offering additional training and even promotions to marshals who negotiate court-ordered bail amounts with scofflaws in the field.

Those who don’t, he said, find themselves out in the cold.

‘Officers like myself would get denied training, get stuck in court more,’ Kil­gore added. ‘That’s where I thought (marshals) were supposed to be. I’ve always thought that we’re not there to generate revenue, we’re there to enforce court orders and uphold the decorum of the court.’”

These cash centric policies of the Las Vegas courts create a predatory nature among law enforcement and effect sentencing policies. Plus, the real danger is that actual criminals, who pose a true threat to local residents, are being allowed to run free, as long as they have a credit or debit card to swipe and some dollars in the bank:

“But the court does handle its share of DUI and domestic violence cases.

Lately, when a defendant in one of those cases skips a court date or violates a court order, records show marshals have been willing to let them off with a fine — even if the offender is violent and even if it is not that offender’s first brush with the law….

State and city audit records show the Las Vegas Municipal Court has implemented several ‘revenue enhancement’ tweaks in recent years, including at least one bail and fine schedule revision in 2003 and a 2012 change that ‘provides defendants options for settling their case in exchange for higher fines and a major bump in the court’s administrative assessment revenue.

The court’s fiscal 2012 revenue report notes a similar policy change requiring defendants to pay program fees before fines — a practice that could see defendants spend months or years paying the court hundreds or thousands of dollars in late fees before even starting to pay down an initial past-due fine….

City employees who spoke with the newspaper recall instances in which marshals collected as much as $1,500 on a $187 speeding ticket, or were called out to cuff a defendant facing multiple DUI charges, only to see those infractions washed away with one swipe of a credit card. Still others said marshals had been directed to collect hundreds of dollars in fines over a ticket for suspended vehicle registration.

‘There are thousands of violent criminal warrants in the system to be worked,’ said one employee, who declined to be identified for fear of retaliation. ‘Instead, they’re putting more emphasis on traffic warrants or just letting these people go.'”

These type of tactics by Las Vegas revenue collectors can’t help but beg for a comparison to the NYPD’s famous unofficial strike, in which they vowed to only harass or arrest people “when necessary.” That didn’t quite work out how they had expected though, when everyone pointed (happily) to the enormous drop in “crime” and pretty much nobody missed them one bit. The biggest lesson learned during that exercise in cutting off your nose to spite your face was when reporters asked people in New York why they were less than brokenhearted over their absence. A good percentage of them explained, that while cops were constantly stopping them for minor, money based infractions or with thinly veiled excuses to harass people they didn’t like the looks of, when they called them for an actual violent crime or legitimate threat, they were often nowhere to be found.

And of course, no story about police or politicians in Las Vegas would be complete without a healthy dose of corruption and inappropriate behavior being involved:

They said the 20-year marshal’s office veteran has been named in no fewer than three formal workplace conduct and sexual harassment complaints, two of which are still pending.

The city wouldn’t say whether Manning has ever been investigated or disciplined in connection with those allegations. Manning’s wife, Cheryl, has served as the city’s chief internal affairs officer since 2007, a post officials say does not include investigative authority over Municipal Court marshals.

Las Vegas employees suspect City Hall is aware of some, if not all of the questions surrounding Manning’s workplace conduct, but chooses to ignore them because he generates “a lot of money” for Las Vegas in fines and fees.

Staffers contend that one way Manning manages to boost those returns is by manipulating warrants ‘ordered’ and ‘issued’ by the court.

A warrant ordered by one of Las Vegas’ 20 Municipal or Justice Court judges can still be voluntarily tidied up through a defendant’s court appearance before a set date.

Marshals can’t make an arrest or collect a fine on such a document until it is put into issued status — a designation that’s not supposed to be approved by anyone but a judge.

Multiple city employees said marshals have been instructed to seek out defendants with an ordered warrant and, if found, call the court clerk to have the warrant switched to issued status, effectively pre-empting a judge’s order on the matter and dangling the specter of jail time in front of defendants being served with a warrant.

Staffers likened the practice to coercion — the equivalent of treating Las Vegas’ most vulnerable residents like an ATM.

So the next time you see eight LVMPD cops arresting one elderly homeless woman on Fremont St., remember they’re keeping you safe and they need to raise your taxes, so they can hire more cops to keep you even more safe from the dangers of having too much money in your pocket.