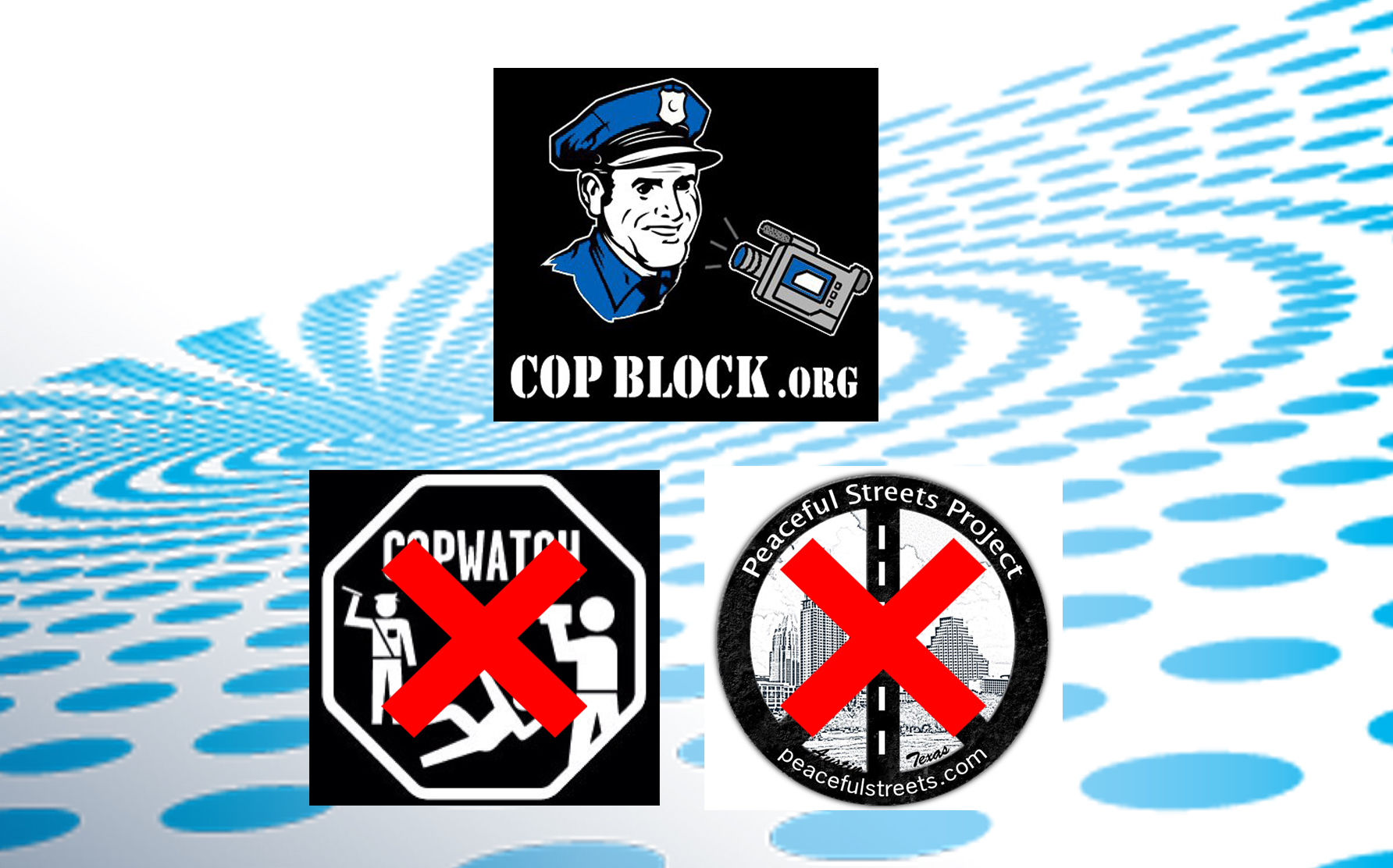 Over the past half decade I chose to allocate many hours and resources to disseminate the ideas encapsulated by the phrase “Badges Don’t Grant Extra Rights.” I connected with thousands of people on the ground during a handful of tours. I authored the most posts at CopBlock.org. And I uploaded the most videos to CopBlock’s Youtube channel.

During that time, in concert with many others, CopBlock.org became a resource hub. One of the most prominent features was the Groups page, which listed known police accountability groups from around the globe – not just groups who chose the “Cop Block” moniker, but also those who operated under other names, like “Cop Watch” or “Peaceful Streets.” Including these groups aligns with Cop Block’s stated mission:

Cop Block is a decentralized project supported by a diverse group of individuals united by their shared goal of police accountability.

No matter the stripe, those listed on the Groups page were helping to move things forward in their community. Without question, we’re all better off when it’s easier to find and collaborate with others nearby. The exchange of ideas, empowerment of individuals, building of networks, and voluntary solutions most excited me.

In the past, many who started new groups were known to myself or others heavily involved. Now, due to the growth of the network, and the sheer volume of people who realize the violence inherent in the police apparatus, that is no longer the case.

To ensure no new group was overlooked and to make it easier for others to connect with them, last year I added a form to that Groups page that enables new groups to add their location and contact information for all to see. As I’d hoped, the Groups page continued to grow with the addition not only of new Cop Block groups, but with Cop Watch and Peaceful Street, as well.

Then something strange happened.

Last week I received an email asking where Tampa Copwatch’s contact information had gone. Huh? I had personally added Tampa Copwatch to the Group page. The founder had ventured up to Atlanta (along with the founder of Cop Block Central Florida when I passed through town with the Police Accountability Tour). I was pretty sure Tampa Copwatch was still active.

So, I went and checked out the Groups page for myself. I found that it had been radically altered. All the non-Cop Block groups were missing. Did someone hack the page? Not exactly – it turns out that the mass deletions were made by the founder of Cop Block, Ademo Freeman. Huh?

I emailed Ademo, and noted:

Is the prime motivation for the site now to push the “CB brand” rather than to facilitate bottom-up connections regardless of the banner? Is an organization now being put before an ideal? I’ve got to say, this is a big thing for me personally. It goes in the opposite direction of what should be the core focus.

Ademo replied and stated that the page was being restructured to “promote cop blocks brand first and foremost.”

Has CopBlock.org suffered from mission creep? Is police accountability now secondary to the promotion of a brand?

Removing any principled groups from the Groups page will only stymie overall effectiveness. It matters not what branding is claimed by those involved. What is important is the spread of ideas.

After having almost gone into “law” enforcement, I know first hand the paradigm-shifting implications that can be had by simply being introduced to a new idea. In fact, I often told people that Cop Block was more an idea than anything – a phrase often followed by its corollary – that ideas have consequences.

As Julian Assange outlines in When Google Met Wikileaks, the potential of a decentralized network is huge:

What is happening is that these people are finding each other across the world and across states. We are creating our own computational network of human beings that can think the same way, that can trust each other on a point-to-point basis… an organization starts to form as these people start to find each other locally. As they discover each other they become optimized – that network of notes starts linking up and becoming more and more efficient at comprehending its environment, planning for action, and then acting.

What will be the fate of the Groups page at CopBlock.org?

Perhaps if enough feedback is received, Ademo will re-add the groups he removed. Or maybe further decentralization is a better solution, and the information below will be mirrored and continually updated by other website operators.

The strongest networks are the ones that eliminate single points of failure. CopBlock.org need not become such a point.

No known groups [change that! scroll down to learn how to start a group]