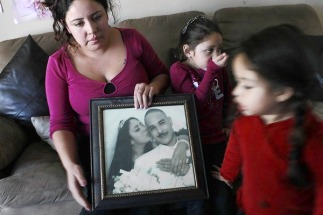 The family of an unarmed man shot to death in 2012 by Los Angeles County sheriff’s deputies in Compton, California received a $5.3 million settlement Tuesday, but the officers involved were not charged.

36-year-old father of two, Jose de la Trinidad, had just left his niece’s quinceañera, riding in a car driven by his brother on the night of Nov. 10, 2012, when police attempted to pull them over for speeding.

The driver fled, leading the deputies on a short chase before the car stopped and let Trinidad out, before speeding off again. The driver was arrested after wrecking just up the road.

Police claim they saw the driver pass a handgun to Trinidad before the chase began. When Trinidad got out, he crouched down and reached for his waistband, police said, prompting them to shoot.

A witness said however, that De la Trinidad put his hands on his head, in compliance with the officers commands before they opened fire.

No gun was found at the scene and a coroner’s autopsy revealed that Trinidad had been hit seven times, five times in the back, before expiring on the scene.

“He was a hardworking man who didn’t deserve this,” widow, Rosie de la Trinidad said at the time. “He did what he was supposed to do and now he’s dead.”

The woman filed a lawsuit against the county in April 2013, alleging wrongful death and excessive force by the two deputies who shot her husband.

In 2014, the district attorney’s office refused to file charges against the deputies  saying they “acted in lawful self-defense and defense of another when they used deadly force.”

Arnoldo Casillas, attorney for Rosie de la Trinidad, said Tuesday that he was outraged by the decision not to prosecute the two deputies.

A new investigation into the incident has been launched by the Sheriffs Departments internal affairs bureau, a county official said.

Officials are expected to reconvene in June to reconsider charges and disciplinary action for the unidentified officers involved.