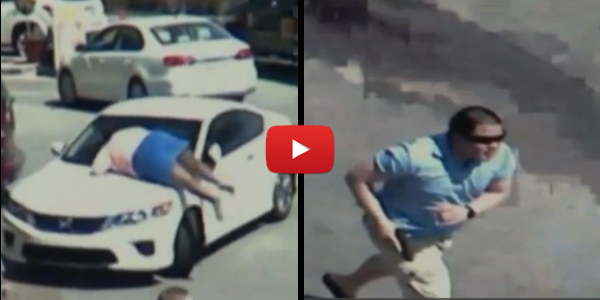 In last week’s “Better Than A Cop” story I highlighted Kentrell Ferguson who stopped a sexual assault in progress with nothing more than a stick and brick. In this week’s edition our hero has no name – or its yet to be made public. In the video below, taken from security cameras on site, a man saves a woman’s car from an attempted carjacking.

The woman, who stopped at a car wash in Smyrna, GA, didn’t realize she was being stalked by four men who were waiting for an opportunity to steal her car. Once the woman exited her vehicle one of the men from the van jumped into the car and attempted to drive off. The woman sprung into action, jumping on the hood of the car with hopes of stopping the man. It didn’t work and the carjacker proceeded to drive off with the car owner on the hood. At this time it was looking like the car owner was going to have a bad experience from her brave attempt to save her property. One could only assume the carjacker would have drove off and, most likely, tossed the woman from the car when doing so, most certainly resulting in some sort of injury. Luckily for the woman the unidentified man seen in the video noticed the carjacking. He withdrew his firearm from his waistline and is seen going after the car. What’s not seen on camera (or released to the public) is the unknown man shooting the carjacker and waiting there for police to arrive. As noted in the video, the carjacker was shot once and is in stable condition at the local hospital. It’s unclear whether or not the man fired more than one shot but that seems to be the case.

I understand that the man is identified as a “city employee” and this could mean he’s a police officer. I decided to use this story as the feature for this week’s “Better Than A Cop” anyways because, even if the man is an LEO, he wasn’t on duty at the time. Furthermore, if he was an LEO, that would have been added to the story to further the hero worship and he probably would have emptied his clip into the car, like this Cleveland officer, if he were a LEO. Even if it comes to light that he is a LEO, this story still highlights the point I attempt to make with many LEO’s. That they don’t have to work for the nasty corporation known as the United States Government to do good.

This unknown man, LEO or not, didn’t have to put on a badge and uniform, while accepting funds from people, who may not voluntarily provide them, to actually help someone, who was clearly being victimized. He presumably didn’t spend his time before this, or after, partaking in revenue generation or enforcing victimless crimes. Nope, instead he was doing his own thing, when he noticed an opportunity to help a person in actual need. Thanks to this man’s bravery a lesson has been sent to carjackers in Smyrna, a woman’s property was saved and a crime was stopped. Once again, proving that with personal freedom comes responsibility, neither of which are – nor can be – provided by police and that’s why this is this week’s “Better Than A Cop” story.

Until next week, remember that, “Badges Don’t Grant Extra Rights.”