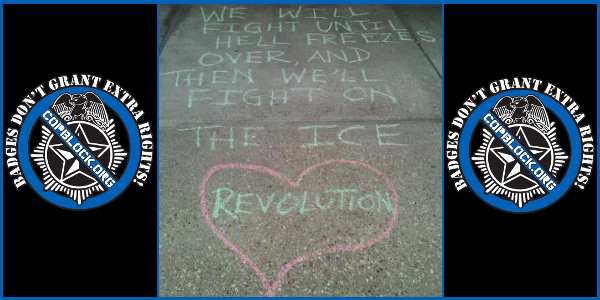 I found out this morning that May 15 is National Peace Officer’s Day, proclaimed by John F. Kennedy in 1961 then signed into law in 1962.

To pay tribute to the law enforcement officers who have made the ultimate sacrifice for our country and to voice our appreciation for all those who currently serve on the front lines of the battle against crime, the Congress, by a joint resolution approved October 1, 1962 (75 Stat.676), has authorized and requested the President to designate May 15 of each year as “Peace Officers Memorial Day,” and the week in which it falls as “National Police Week” and by Public Law 103-322 (36 U.S.C. 175) has requested that the flag be flown at half-staff on Peace Officers’ Memorial Day.

We all know there is a fairly large difference between how many police are killed and how many people police kill. It is pretty difficult to find accurate numbers, but according to the “Killed By Police” website, 1100 people died in the hands of US police in 2014, and according to the “Officer Down” website,  127 cops died in the line of duty during the same time frame.  The math there is pretty easy, but I think it needs to be stated that there is a 973 person difference. Nine hundred seventy three more people died in police custody last year than cops died in the line of duty. We are the dangerous ones??

It is imperative that we remember our fallen. Our friends, neighbors and loved ones whose lives ended not with their spouses, children, or friends, but with police officers. I propose that we use May 15th to do just that. This May 15, let’s have another National Chalk The Police Day. Put your copblock gear on this May 15 and go out peacefully armed with sidewalk chalk to get your message out. Write your favorite police accountability urls or quotes on the sidewalk (hopefully that includes copblock.org) and write the names of those who’ve been senselessly murdered by police (people tend to google random stuff written on the sidewalk). Last time we did a Chalk The Police Day, many people wrote “google voluntaryism” in hopes of spreading the idea of real freedom. It is important to note that chalking has resulted in arrests in the past in LA, NH, Las Vegas, Fresno, and even a little girl in NY.  So, use caution and common sense. Here are some pretty sweet examples of chalking from a previous Chalk The Police Day.

So……… May 15, everywhere. Set your facebook event, get with your local copblock chapter, let us know where you will be so we know where to look. Rock your copblock gear (Ademo is even considering a sale…) and get out there and express yourself. Safely.