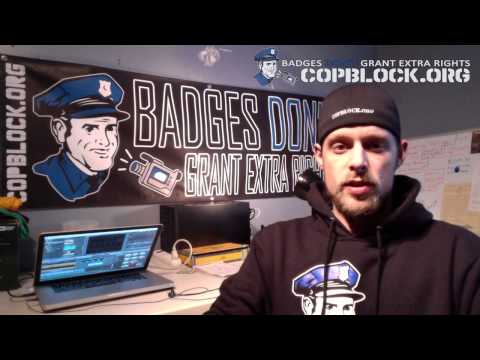 Ademo Freeman. CopBlock Founder, blogger, and motherfucker was arrested today for contempt of court in Zanesville, Ohio. He was there to see about a Zanesville CopBlocker, who was arrested for obstruction for filming last night. The bailiff in his Bambuser video challenged him to show him where he had walked in the courtroom with a hat on. This created an argument about filming in the courtroom to which Ademo responded, “I sued the last mother fucker who told me I couldn’t record in a courtroom, you wanna be next?”

The shitbag bailiff then went into the judge and told him Ademo called HIM a mother fucker! The judge found Ademo in contempt and told him he was sentenced to 10 days. After an apology, the judge relented and lowered the sentence to 5 days. People we know in Zanesville are worried about Ademos well being when he gets out, as they know how Zanesville cops are.

I am on my way down to Zanesville right now to lead the protest to “Let That Mother Fucker Ademo Go!” I have made several signs and am going to be joined by as many people who read this and give a shit that we are not allowed to express ourselves under the First Amendment any longer! Come out tomorrow to Zanesville police department where we will protest the arrest of Ademo and others for filming the police!