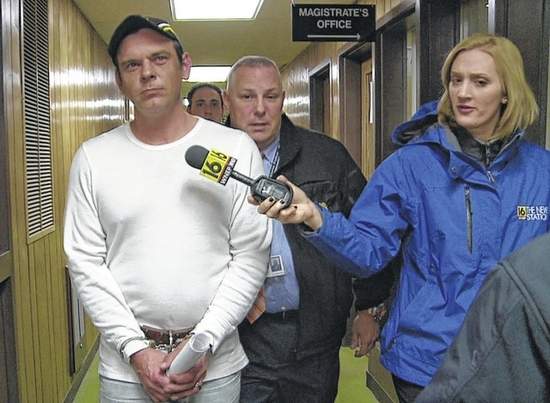 Who in Pennsylvania has two thumbs and is being accused of using them to assist him in sexually assaulting children? That guy right right up there. David Turkos, who has had a long and illustrious adventure as a be-badged  career criminal, is accused of molesting two minors in Pittston between 2001-2008 while he was a police officer in nearby Dupont. The complaint against Turkos reveals that the former cop used handcuffs and zip ties to restrain the children to furniture while sexually assaulting them. In order to dissuade the children or their mother from reporting the horrifying abuse, the officer would threaten to kill them and bury their bodies in local mines where they ‘would never be found’. At one point he even put a gun to the head of the family’s pet cat to terrorize them in fear and keep them silent. David Turkos, however, claims that he is innocent and is being set up.

In 2010 the ‘alleged’ child molestor was convicted for corruption of minors after having masturbated in front of a group of kids the year before. He was then sentenced to 6-12 months in a county prison. Kurkos was also charged with beating his wife and stepson in 2008, while still a police officer, and later pled down to convictions for harassment and simple assault. His former wife later claimed that the police had failed to uphold the restraining order, while Turkos continued to terrorize and abuse the woman and her son. Further, police retaliated against her for filing complaints about their failure to uphold the restraining order. The woman has since won settlements in these cases. The corruption has only led to minor personnel changes. Any way you slice it, the soon to be inmate of the month seems to have been more involved with his own criminal scandals than in preventing others, while being supported by his colleagues unquestioningly.

Turkos, 42, now resides in Dupont on Wyoming Avenue. On Tuesday, courts arraigned him on charges which include- three first-degree felony counts of involuntary deviate sexual intercourse with a child, two misdemeanor counts of indecent assault, and one misdemeanor count of simple assault. His preliminary hearing has been set for April 22 in Pittston. He was released from captivity Tuesday night on a $50,000 bail bond.