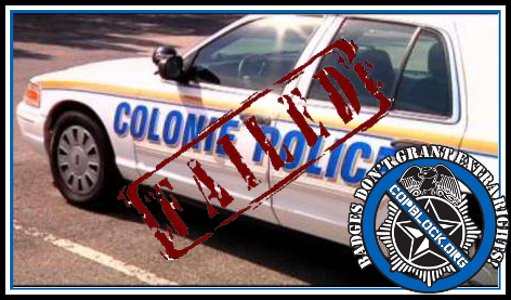 Without people coming forward, you would not hear stories like this. It happens all over the country and people don’t realize this happens every day. I had a chance to interview a few brave people to come forward with their stories. These people are plagued by issues that we all face at some point in our lives and they turned to the people that are supposed to help, but learned that is not always the case. This could happen to any of us at any time. Where do you turn to for help after the people who are supposed to help you don’t?

Mr. John Kalenian was stopped by Colonie Police in Colonie NY on April 13th 2014, for allegedly not using his blinker. It was a normal stop until Officer M. Garrigan badge #497 noticed a prescription bag in the center console area. Mr. Kalenian picked up a prescription for a friend who is disabled. He has picked up the prescription on many other occasions as the friend is disabled and not able to drive herself or walk to get it.

The injustice doesn’t stop there, Mr. Kalenian was assigned a public defender, but was told by the public defender that she was not prepared to defend Mr. Kalenian in court and that the defense he had prepared on his own was better then she could provide and has since not contacted him again. Mr. Kalenian returns to Guilderland court on April 30th @7pm.

Ms. McNally has been having disputes with a neighbor over common things like property lines, fences and parking. What is so common here is the police don’t want to get involved to help. Ms. McNally was hesitant to come forward with her story because she doesn’t want to anger the neighbor, but feels hurt by all the things that have happened and the fact that the Troy Police are not helping to make life livable in that neighborhood.

The problems started in 2001, when she noticed a 4′ x 8′ plywood sign in the neighbors yard that said “3 fat lesbians must die” with drawings of the women living in the house and with tomb stones that had each woman’s name on it. Troy PD on two different times stated it was free speech and not a hate crime. However, on a third visit a Troy officer, after hearing Ms. McNally’s argument that if it had a racial slur rather then a sexual slur would it be free speech or a hate crime, decided that the sign must come down.

Shortly after that, there was a dispute over a ladder that Ms. McNally had on her side of the property. Troy Police decided to arrest her for possession of stolen property and during the arrest knocked her down the porch stairs while in handcuffs, because she was not moving fast enough They then threatened her with a tazer, if she didn’t get up. Now, keep in mind that she is a nurse that works with troubled teens and at the time was on the heavier side, so she posed no threat. All charges dropped in that instance. Next, came an issue with a fence the neighbor took down that belonged to Ms. McNally. The fence was piled up in the neighbors back yard, so she called the police. They told her that “this is not a police matter and she should take him to court,” because they are too busy with murders and arson to worry about this.

The last incident involved the youngest son, who was about 24 years old, kicking Ms. McNally’s car door. She called the police, because that’s what you are supposed to do. The police told her that the individual who kicked the car door is claiming you tried to run him over and his charge would trump yours. So if you want to proceed with filing charges, you would be the one going to jail. And the last thing said to her was if you are having such trouble with your neighbors just move. As you can see, the Troy Police are hard at work helping the community solve problems.

If you have had similar problems please comment below. Share your story. If your have video of your encounter submit it to CopBlock here.

More video’s from the Capital District Cop Block can be seen here.