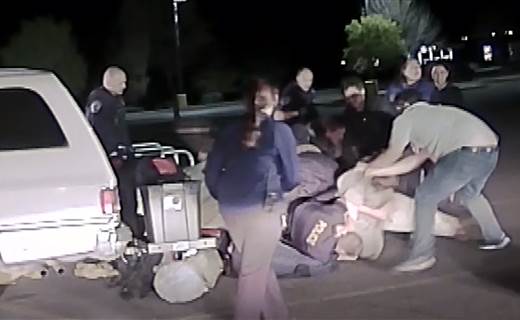 Here’s a video we found of a family brawling with the cops at a WalMart in Arizona. The police show up en masse and try to separate a father from his family. He doesn’t take it well and starts yelling. The police escalate the situation, and someone ends up dead. That’s par for the course, when dealing with the police.

We don’t see what reason the police had for being there, but when they arrive, no one is throwing punches or anything. It appears the family is discussing something, when the officers step in between people like they were fighting. A few calm minutes upon arrival might have deescalated the situation to where they would have talked freely and separated willingly. In my opinion, the police escalation from the jump is what caused this.

We can do better than this! This cannot be the way policing can continue to be handled. Department of Justice reports around the country are saying the same thing. “Training.” A lack of training for police officers seems to be the root of the problem. Whether the policing monopoly continues with one company supplying the protection service, or a diverse set of companies can handle the job, proper training is needed. Seems McDonalds workers get more training than police officers these days!