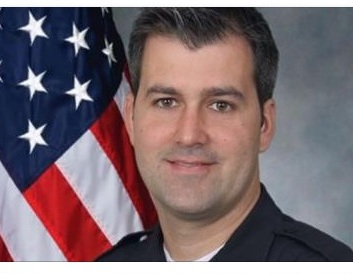 Officer Michael T. Slager was arrested recently after a video footage revealed him shooting victim Walter Scott in the back multiple times as Mr. Scott attempted to run away. (See more from Cop Block here). It’s not a regular occurrence that police misconduct of this gravity is caught so vividly on video, and it appears even the usual psychotic police apologists are a bit hesitant to take the side of the officer on this one.

The video was taken by bystander Feidin Santana, who released the video to the media. Mr. Santana explained he almost deleted the video out of fear for retaliation and perhaps even death at the hands of police. He was interviewed by NBC and reported he was observed by police immediately after the incident; he made a statement to the officers expressing he had witnessed their commission of abuse. The officers asked him to stay and wait on the scene, but he eventually left to go to work.

Mr. Santana suggested in the NBC interview that he was making public appearances in part to protect himself (smart man). He also recently met with Mr. Scott’s family, who expressed their gratitude for publicizing the truth (see the emotional reunion here).

Slager’s dash cam footage was recently released, confirming what could be deduced from Mr. Santana’s video. Mr. Scott was stopped by Slager for a broken brake light. During the encounter, Mr. Scott admitted to not having insurance or registration papers. Slager tells Mr. Scott, “OK, I’ll be right back with you,” and returns to his patrol car. After a brief moment, Mr. Scott opens the door and Slager commands him to get back in the car. After another brief moment, Mr. Scott takes off running.

As heard on the dash cam video, Slager was listening to Everclear’s “What It’s Like,” in his patrol car while engaged in this encounter with Scott, but it is clear the song’s message of compassion and empathy was lost on the officer, who proceeded to chase Mr. Scott down and shoot him in the back multiple times.

While it’s not particularly recommended that one drive around without valid insurance or registration papers, it should be evident the appropriate punishment for failing to pay government fees is not death. Slager’s swift and unhesitating decision to execute a man for this petty offense truly speaks to the extent to which policing in the United States has prioritized enforcement over safety and violence over peace.

Slager’s murder charge is a start, but it will not be surprising in the least if the charges are dismissed or reduced, or if he is ultimately acquitted by a jury like so many killer cops before him.