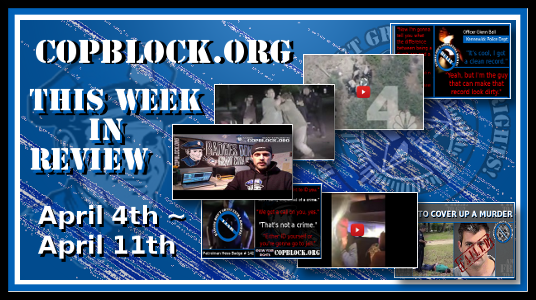 Texas CopBlockers, via Brettsanders.me, broke a story about a pregnant woman in Texas being physically assaulted by cops in Quinlan.

“It all started when one CPS bureaucrat knocked on the door of the residence and directed two Hunt County Sheriff deputies to display a court order to come inside and interview the children and family. The owner of the house asked to see the court order again since it was quickly flashed and not properly displayed.

According to the homeowner, as soon as she requested to view the court order a second time “the police forced their way into the house.”  She was pinned in the corner of the kitchen and that’s where the video starts. You can clearly see the 38 week pregnant women as she screams for help and reminds them she’s pregnant”

Sheriff Randy Meeks would later hold a press conference and, to the amusement of everyone attending, claim the pregnant woman reached for the officers gun.

Thanks to the CopBlock Network and it’s continued success we’ve been able to bring on three new contributors; Brian from Fresno CopBlock; Michael Heis also of TonyStiles.com and the return of myself (Brett) as well. This is in addition to Kelly (of NVCopBlock.org), DEO (of GreaterCleveland CopBlock), Kate (of Keene CopBlock), Georgia (original CopBlock Contributor) and Valerie (of Columbus CopBlock). We’re always looking for content creators so contact Ademo here or use the Submission Tab found on the site.

We’ve also launched the Killer Cops series with the recent murder caught on tape by Michael Slager, which will be lead by CopBlock Contributor, Georgia Sand. See her the first installment of Killer Cops here.

DONNYBROOK AT ARIZONA WALMART BETWEEN IDAHO FAMILY AND POLICE, ONE CIVILIAN DEAD (VIDEO)

Here’s a video we found of a family brawling with the cops at a WalMart in Arizona. The police show up en masse and try to separate a father from his family. He doesn’t take it well and starts yelling. The police escalate the situation, and someone ends up dead.

Ademo Freeman. CopBlock Founder, blogger, and motherfucker was arrested today for contempt of court in Zanesville, Ohio. He was there to see about a Zanesville CopBlocker, who was arrested for obstruction for filming last night. The bailiff in his Bambuser video challenged him to show him where he had walked in the courtroom with a hat on. This created an argument about filming in the courtroom to which Ademo responded, “I sued the last mother fucker who told me I couldn’t record in a courtroom, you wanna be next?”

Police in Virginia Beach, VA have been caught on video assaulting two teenagers after pulling them over for a broken license plate light. The cops subsequently tried, and failed, to delete the footage captured via cell phone.

The cops claimed that they could smell marijuana, so had probable cause to detain 18-year-old Courtney Griffith and her 17-year-old friend Brandon, remove them from the vehicle and search it.

The quick thinking Griffith pressed record on her iPhone and placed it on the dashboard, capturing the entire incident.

A Secret Service agent and a DEA agent with lead roles in the investigation to take down the Internet drug bazaar Silk Road allegedly stole proceeds from the underground site and hid their booty in offshore accounts.

An HPD officer was arrested on the job Tuesday, part of Drug Enforcement Agency investigation out of New Orleans.

Houston police arrested Noe Juarez Tuesday morning during roll call at the central command station at 61 Riesner, according to the FBI. The FBI and DEA were working together in an alleged federal drug probe, serving a warrant out of New Orleans.

Charges against him are sealed until after Juarez’s first court appearance, but sources say Juarez was caught escorting a drug cartel across state lines, and apparently he was paid some big money. There are a number people, including law enforcement officers, being investigated, but the FBI wouldn’t comment at this time.

A former Baltimore County police cadet has been sentenced to 4 years in prison for stealing drugs from the department’s evidence room.

Ishmael pleaded guilty in January to felony theft and possession with intent to distribute Oxycodone.

Thanks again to all the donors, contributors and supporters of the CopBlock Network who make it such a huge success.