It is hard to imagine that this surreal story does not originate in a nation run by a violent warlord (or maybe it does), but it actually comes from Florida, where Lucas Jewell, a resident of Gainesville noticed local members of the Alachua County Sheriff’s Department were riding through town in a tank-like armored vehicle that appears to be a Lanco BearCat, an armored personnel carrier intended for military use.

As Mr. Jewell believes that this is a gross abuse of taxpayers’ dollars and is opposed to the militarization of police, he found this display of military hardware on public roads offensive and showed the individuals in riding in the tank his middle finger and proceeded to continue on his journey.

The deputies from the Alachua County Sheriff’s Department had other plans; they followed Mr. Jewell closely for several blocks and then decided it to pull him over in an attempt to punish and intimidate him.

What appears to be paramilitary group of individuals exited the armored vehicle and immediately proceeded to assault Mr. Jewell, accuse him that he was receiving oral sex from his girlfriend and his middle finger gesture constituted an “improper hand signal” in violation of Florida traffic law.  The suggestion that a middle finger raised in the air was intended to be a traffic hand gesture is ludicrous, but it did not stop these cops from attempting to bully Jewell into submission. 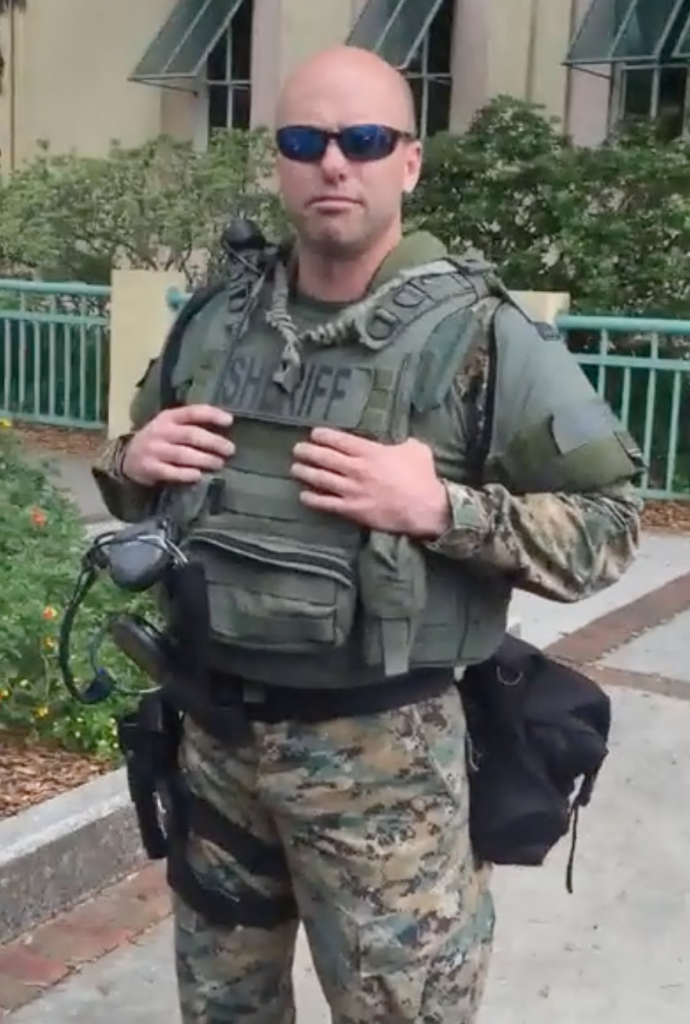 The video below was provided to TruthVoice by Mr. Jewell and it illustrates the level of militarization that local police forces are reaching, including patrolling U.S. streets and using military vehicles to enforce minor traffic violations or punish peaceful citizens for protected speech. (Full disclosure: the video was edited to remove some personal identifiable information about the victims)

As these police officers were property informed, an obscene gesture directed towards them is considered protected speech and has been cemented by a number of federal court cases over the years.

This did not deter the cops from pursuing various accusations against Mr. Jewell and his girlfriend, none of which were sound or reasonable.  Fortunately, a crowd started to gather and take pictures which prompted Mr. Jewell to start chanting, “Tell me what a police state looks like? This is what a police state looks like!”  After this the cops gave him a warning for an “improper hand signal” and let him go.

Regardless how one feels about making an obscene gesture towards police officers, the bottom line is that such a gesture is a protected constitutional right and nobody should be harassed for it, especially by heavily armed thuggish individuals riding around in what appears to be a tank through downtown Gainesville, Florida.

We object to this gross display of military force aimed at limiting the free speech of an American and we ask that you voice your opposition to this abuse by contacting the Alachua County Sheriff Sadie Darnell at 1-866-273-5910 or on their Facebook page here.


Below are some additional pictures of other unidentified armed individuals who appear to also be members of this department. If you know the identity of these armed and dangerous individuals please contact me at vvaduva at truthvoice.com so we can investigate what authority they have to use military equipment and tactics towards American civilians.