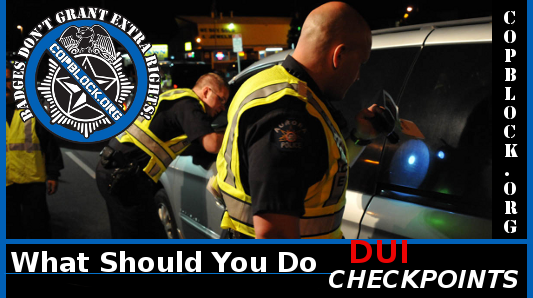 When many people are stopped by the police, common sense flies out the window. They do, and say, things that only give law enforcement an excuse to question them more. Learning the law and knowing your rights can make the difference between going home at night or spending the night in jail – or worse. There’s a simple way to make sure you are never charged with driving while drinking.

In a fantasy world, police are still there to “protect and serve.”  Cops are willing to give people the benefit of the doubt and try extra hard not to lock up an innocent person.  After all, “innocent until proven guilty,” right?

Not so. And when it comes to being accused of drunk driving, the lines of authority and guilt are blurred.

Let’s get the obvious solution out of the way. If you’re drunk — don’t drive. It’s that simple. No, you don’t drive better when you’ve had a few and no, you’re not six-feet tall and bullet proof.  So, if you’re drunk — or think you might be — just don’t get behind the wheel.

If you’re drunk and you get in the driver’s seat, then you could hurt yourself or someone else — or worse. You’ll wreck your car or destroy someone’s property. If you’re caught, you’ll get arrested, lose your license and fork over a lot of money in fines. Your insurance rates will rise steeply and you might lose your job.

Now, with that said, let’s take a look at the real world. The real world is the place where you don’t have to be drunk driving to be arrested and found guilty of drinking and driving. The real world says any person with any amount of alcohol in their system is on deck for a drunk-driving arrest and entirely responsible for any wrecks that might occur — regardless of what led to the accident.

This is not speculation or exaggeration. Never assume that because you’ve had just a few drinks and are driving in a responsible manner that you are immune from the “drunk driver” label and the consequences.

So, how do you avoid having a DUI nightmare wrap itself around you?  Avoid drinking and driving altogether. No beer at the ball game. No wine with the meal. No drinking at parties and stick to soft drinks at weddings and celebrations. Get the picture?

However, if you’re hard-headed and still want to drink and drive, there are several things you can do that will lower the chances of being stopped and charged with DUI.

Cops need “probable cause” to stop someone. Probable cause could be anything from a traffic violation to an observable defect in the car’s safety equipment — remember that “broken tail light” that led to Walter Scott’s murder?  When given a choice of vehicles to stop, a cop will pull over the one with the most obvious violations or defects.  Most of these are controllable situations.

Plainly, violating a traffic law is a perfect way to attract a cop’s attention. But being overly-cautious will tend to get you seen as well. Driving well below the posted speed limit, signaling a turn half-a-mile before you get to it or not taking your turn at a stop sign will get you noticed. Driving more than a mile without violating some arcane traffic law is practically impossible. If a cop starts following you, pull into a parking lot to avoid having them behind you.

Which is a better time for a cop to catch his quarry?  Sunday at noon or the bar’s closing times? Simple. The cops are also watching out during special events like festivals and sports contests. Even church picnics have been a good “fishing hole” for cops interested in catching someone. Just be sure that you stay with the flow and speed of traffic, your car is maintained, and you are not “standing out” for any reason.

You’ve Been Stopped — Now What Do You Do?

Despite everything, a cop has found a reason to pull you over. Typically, you may appreciate being told one of your headlights is burned out. But what if you’ve been drinking — maybe you’re not drunk — but you have been drinking.  What do you do now?

Accessible. Make sure to keep the vehicle’s registration and insurance somewhere that they are easy to get to. Having a cop waiting for you to dig around in the glove box is not a good thing. Neither is simply not being able to find them. Turn the car’s interior light on and keep your hands on the steering wheel where they can be found.  HINT: If you have the chance, and you have been drinking, roll down the window to vent the interior. You don’t want to wait until the cop taps on the window and give him the odor of Jim Beam.

Be Courteous. Stay calm and polite, but don’t admit to anything. A cop may pull over dozens of drivers a day. The typical driver may get pulled over only a couple times a year, so it’s stressful on many motorists. When stressed, drivers tend to be overly friendly and talkative.  Fight the urge.  Remember, you are under no compulsion to provide the cop with any information that isn’t contained in your driver’s license, car registration, or insurance.

Any admission, any statement, however seemingly benign can be used against you. Even something like, “But officer, I just had a glass of wine with dinner,” will cause the cop to investigate further. If you hadn’t opened your mouth and made that small admission, the officer can only base their decision to pursue a DUI arrest based on your driving or mannerisms.

If a cop pulls you over and asks if you’ve been drinking, answer his question with a question: “Would you like to see my license?” A malfunctioning headlight is not an indication of drunk driving and neither is the refusal to gab about what you’ve been doing that evening. Even if you have been drinking, you don’t need to admit it. A good, neutral, response is, “I have nothing to say about that.”

If the cop decides to continue his investigation, he may ask you to perform some physical tests. Politely decline. It is not obligatory to take part in the tests and there is no penalty if you refuse. The only reason the cop will give these tests is to give him or her more justification to require you to take a blood, breath, or urine test.  Don’t be belligerent and argue. Don’t tell him about the third cousin on your mother’s side who is a lawyer. Simply, and politely, refuse the physical tests.

Most states require a driver to submit to a chemical test and the loss of the license may be the penalty for refusing to provide blood, breath, or urine. DUI lawyers are divided on whether to provide consent for a chemical test. One argument says that refusal can lead to an automatic administrative suspension of the driver’s license and the other side says the lack of test results makes the DUI case against you that much more difficult to prove.

To be legitimate, a police stop shouldn’t have to rely on trickery, hi-tech devices, and gimmicks to justify a chemical test. The driver’s lack of control of the car, an inability to reasonably react to questions, and physical actions will be a give-away of impairment.

Sadly, the government, commercial interests, and self-serving groups have drilled a negative image into the public’s mind that anyone who drinks and drives is sick and should be locked up.

By labeling practically all drivers who drink and drive as “drunk drivers,” a situation has been created where responsible citizens are suffering substantial fines, exorbitant insurance rates, confiscation of personal property, and even jail time just for violating an arbitrary BAC standard that does not consistently signal impairment.