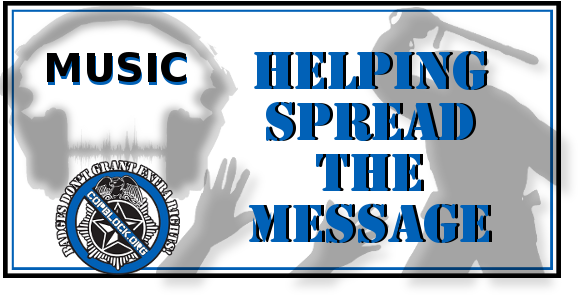 These songs were submitted through the CopBlock.org Submission Tab by their respective artists.

CopBlock.org wishes to help spread information and thought provoking ideas into the public realm that acompany the fact that “Badges Do Not Grant Extra Rights”. We want the public to be aware of their rights when encountering and coming into contact with law enforcement. Many artists and musicians use their talents to help spread the message that police brutality is real and relevant to our communities. Here are three artist submissions that CopBlock.org has recieved so far this month. Remember always Film The Police!

“I just wanted to send you guys this track from my band Gnarlstarz. Figured you may like it and if so… post it. Thanks for doing what you do!

“Spreading awareness and education of the public’s rights when encountering law enforcement is essential to end the ongoing battle against police brutality. This abuse of power has been widely publicized by the posthumously famed, Walter Scott, Mike Brown, Treyvon Martin, Eric Garner, Akai Gurley, Ezell Ford, Kelly Thomas, Sean Bell, Amadou Diallo and countless others who have been subjected to the tragic consequences of poor judgement by those in power. We recognize and acknowledge those in law enforcement who work with the sole purpose of protecting our citizens without bias or abuse, and we emphasize that this record is aimed directly at those in power who let ignorance and ego fuel their decision making. These tragedies are avoidable and must come to an end. In an effort to raise money for the families of the victims, 100% of the proceeds from this record will be donated to the families of Walter Scott, Mike Brown, Akai Gurley, and Eric Garner. Thank you for your support.”

Our third music submission this month is by Chris Golden

Titled ‘Hand’s Up Don’t Shoot’, this song is a collaboration of Canadian artists Golden, YBS Frack, Mic Gutz, and was produced by Beast Inside Beats.

“Thank you for sharing and doing what you do, peace and power to you.”

Hope You Have Enjoyed This Months Music Submissions

Do you want to send CopBlock.org your music submission. Click Here or send an email with links to danny@copblock.org