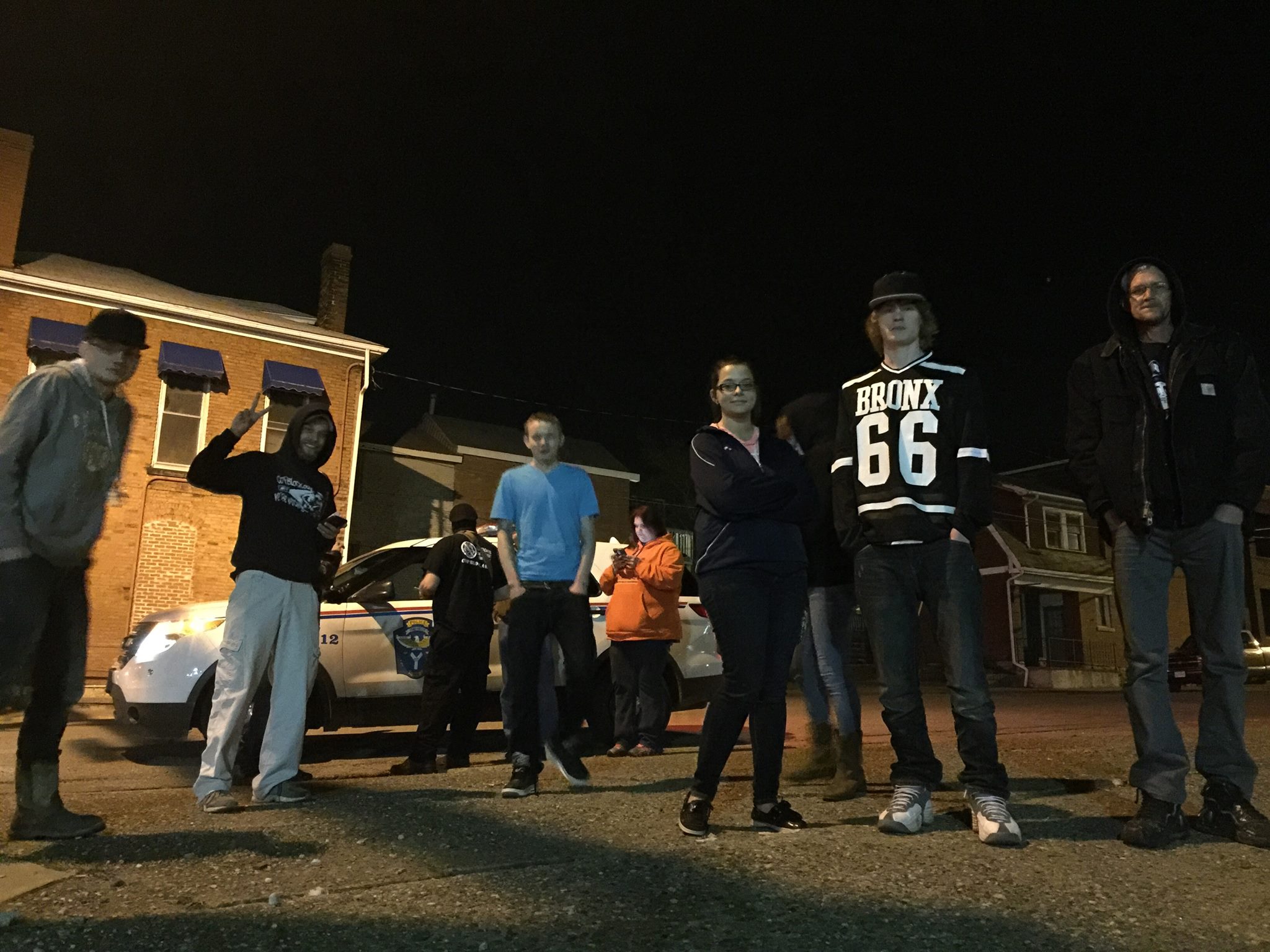 Last Friday I was held in contempt of court for saying, “Motherfucker” in a courtroom. Deo blogged about my arrest – HERE – while I shot a quick video upon my early release and a post later that day; see HERE. Since I was supposed to be in jail over the weekend, a number of Ohio CopBlockers – a term meaning, “people who live in Ohio that believe Badges Don’t Grant Extra Rights”, had decided to spend the weekend CopBlocking the Zanesville Police. Lucky for me I was released early and could join in the fun instead of being caged. We planned to meet up at the police station before heading out but I never made it there because we encountered two cops sitting in a parking lot on the way. It turned out to a good location for us to meet up at, after the cops drove off, and we got the night kicked off, see video below.

CopBlocking the Zanesville police was a great time. It was the largest number of folks I’ve seen out for a single night of CopBlocking since coming to Ohio and I had a good conversation with Officer McCoy (see video below) while having a couple of laughs as well (even the police were smiling). There was most certainly alot of diversity amongst the group too, not just in age and genders, but in terms of experience filming the police as well. There were people in the group that had never filmed the police and people like myself that have been doing it for years. Yet, before I get more into that, watch the video below of me and Zanesville Police Officer McCoy. This will highlight the some of the differences others have, and may, point in the future.

As seen in both videos, Herb – life long resident of Zanesville – is outspoken, direct and, at times, rude when talking to the police. Is this the best way to CopBlock, probably not. Is there only one way, or a best way, to CopBlock? No. What I do know is that Herb is his own person and he’s responsible for his own actions. I also know Herb’s had a much different experience than I have with police. They’ve cost him years of his life in prison, raided his home without a warrant and, less than a week ago, arrested him for filming the police (which is why I went to court and ended up with a contempt charge). Of course the cops claim he was interfering but we’ll let the video tell the truth, if the police will ever give it back.

Does any of that justify verbally attacking someone, most the times no, but in some of these cases – as shown the my bambuser video – the officers who’ve taken Herb to jail or that have gotten rough with him are in these videos. Herb talks about McCoy slamming him against a pole one night while filming the police and you hear McCoy say for himself that he took Herb’s cousin to jail too. In an attempt to make it look less like the police were harassing Herb, which is what they were really doing, but to which he calls, “being fair.” Again, this might not be a justification for the actions but, for me, it provides a better understanding of where Herb comes from. Larry Freeman, founder of Ohio Valley CopBlock, submitted a blog to CopBlock.org in regards to Herb where he said:

I too believe we have a right to say what we want and what he did was his First Amendment Right. We are all responsible for our own actions and words. By my observations of his actions, I believe he deviated from the Non-Aggressive Principle that I had read in the about section of CopBlock.org. “Those of us volunteering at CopBlock.org do not condone violence, though we recognize it is morally acceptable when used in self-defense of self or others. As a general practice, we do not enforce intellectual property claims of any sort, and encourage everyone to use Cop Block information, logos, graphics, etc. to join the fight and contribute to activism in their preferred manner. However, we dissociate ourselves from those who encourage initiatory violence to further their ends, or otherwise do not adhere to the non-aggression principle.” (quote from copblock.org/about) A brief summary of what the non-aggressive principle can be found at http://www.5stepstoanarchy.com/what-is-the-non-aggression-principle/.

I did not video the second group interaction we had with police that night, but several others did. During that second interaction, there seemed to be a pretty courteous debate taking place between Ademo and a Zanesville officer. That was until Herbert again stepped in shouting and taunting the officer. I walked away from the scene and waited to leave. While waiting for my ride, I could hear the shouting from over 50 yards away and heard Herbert make a comment to the affect of taking a baseball bat to the cop.

I most certainly don’t think it’s a good idea to threaten anyone who hasn’t initiated force against you (or another). To say it to an officer will land you in jail faster than anything, with the key thrown away and all your property destroyed. Plus, this officer didn’t deserve that. Herb was riding in my car most of the night and we definitely discussed the topic and I’m sure he understands this, yet, it brings me back to something I said earlier. We’re all united by the idea that Badges Don’t Grant Extra Right but we’re still responsible – as individuals – for our actions. I can only hope that by more people coming to the idea that Badges Don’t Grant Extra Rights that it will merely provide us more opportunities to learn from one another. Whether you’re the best CopBlocker, poorest CopBlocker or somewhere in the middle, there’s value in simply being active.

CONNECT WITH THOSE ACTIVE AT ZANESVILLE COPBLOCK HERE.

There are some great CopBlock Resources made here over the years and I highly encourage everyone to CHECK THEM OUT (by clicking the banner below)! Knowledge is power!