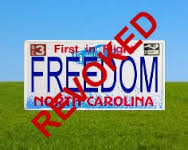 UPDATE: Pete went back to the courthouse with his CopBlock Press Badge and refiled his request to film Matthew’s hearing tomorrow. This time he used Bambuser to livestream and it seems his interaction with Pamela went better than mine, see for yourself:

On March 25th, Kelly Patterson, editor of CopBlock.org, published a submitted article to CopBlock.org about Matthew Townsend, who’s facing a felony for a Facebook post. From that post:

On February 2nd, 2015, Idaho’s most prominent Cop Blocker Matthew Townsend was engaged in a one-man protest on a sidewalk in Meridian, Idaho when he was accosted by Meridian Police employee Richard Broadbank who accused him of “blocking traffic.” When his attempts to get Matthew to agree with him and submit or incriminate himself failed, Broadbank resorted to saying “well, I saw you…” [blocking traffic.]

At this point, Matthew told officer Broadbank “then charge me.” and pushed the crosswalk button, and proceeded to cross. Broadbank was silent for a moment, and when Matthew was halfway across he began to shout that he’s not done with him yet. Matthew was then arrested for “resisting and obstructing,” simply for exercising his rights.

Then on the evening of March 20, Matthew was arrested again and charged with a felony for a Facebook post, in which he explained that he intended to protest and shed light on the Meridian police if this asinine charge wasn’t dropped.

Matthew is being retaliated against by the Meridian police and city for being an activist, and the local mainstream media simply isn’t going to cover anything that offers the local police in anything other than a glowing or magisterial light. Please share this article by journalist William N. Grigg on Matthew’s abduction in order to help spread Matthew’s side of the story, and protect activism from unjust police abuse and silencing.

This afternoon Pete Rimkus, of Idaho CopBlock, contacted me after he jumped through the ridiculous government hoops to file a request to film Matthew’s hearing tomorrow with Judge Theresa Gardunia. As seen in the documents provided by Rimkus, there’s an area titled, “News Organization Represented” and he filled in “CopBlock.” At 9:24 am this morning Rimkus was sent an email granting his request to film (see two page docs here and here). At 9:46 am he was sent another email attachment with the words, “Order REVOKED. You are not a ‘media’ outlet” written on it (see file below). It seems the signature accompanying those words match that of the first, approved, request less than 30 minutes before hand. Meaning the Judge herself revoked the approved order. So what changed? I decided to reach out to Gardunia but was unable to connect with her. I was however able to speak with Pamela Bourne who had this to say:

Interesting how she stated that the Gardunia did some ‘additional research’ and decided to revoke the request. I wonder what she found in her short search that made her revoke access to a public forum. On the document she noted that CopBlock is not a Media outlet and, depending on your definition of that, CopBlock might not be. The problem is that the Idaho Court Administrative Rule 45 (Cameras in a Courtroom) fail to mention media credentials, or any sort, as a requirement to film courtroom proceedings. See for yourself:

(a) ‘Audio/visual coverage,’ as used in this rule, means broadcast, video, audio, and photographic coverage or recording of public proceedings before district and magistrate judges. Broadcast means the transmission of images or sounds by any electronic means, including but not limited to television, radio, Internet, email or streaming.Audio/visual coverage is authorized subject to the discretion of the presiding judge. The presiding judge maintains the right to limit audio/visual coverage of any public hearing when the interests of the administration of justice requires. Authorization may be revoked at any time, without prior notice, when in the discretion of the court it appears that audio/visual coverage is interfering in any way with the proper administration of justice.

There are times when media is referenced in terms of things they should, or should not, do but no where does the Idaho Court of Administrative Rule REQUIRE you to be media to have acceptance. So what happened here? Is Gardunia trying to keep Idaho CopBlocker Pete Rimkus from filming a public hearing? I’m going to keep inquiring on the matter until we get an answer or Rimkus is allowed to film. The picture below has the contact information for Paula Bourne, as she’s the only lead I have, feel free to let her know your thoughts.