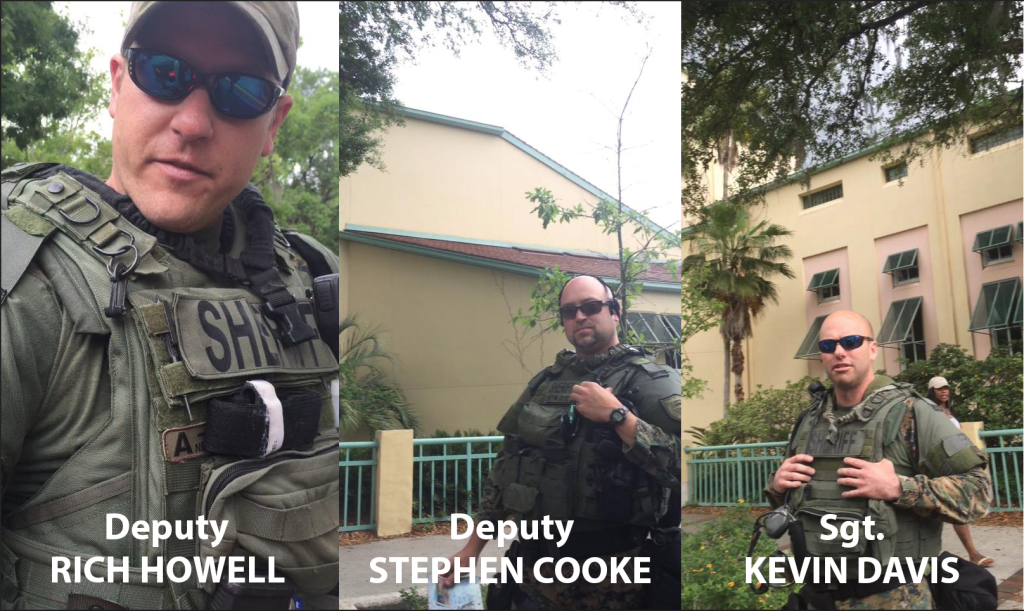 It took less than 48 hours after we broke the story regarding the use of an armored vehicle for a routine traffic stop in Gainesville, Florida,  for the office of Alachua County Sheriff to go in damage control mode attempting to assure the public that they are not in fact the “jackbooted, military-styled tyrants” they were shown to be in a video that quickly went viral across social media. 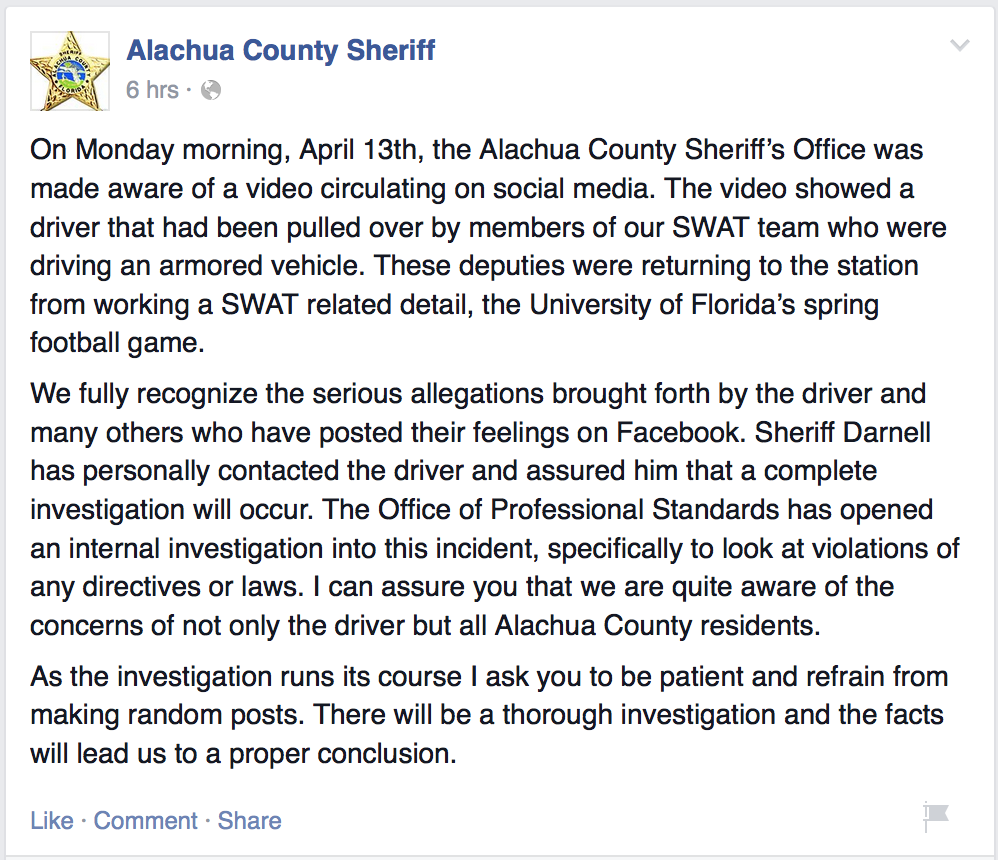 In a statement made on their Facebook page earlier today, the Alachua County Sheriff’s Department announced that an internal investigation was launched into the use of a Lanco Bearcat armored vehicle to conduct a routine traffic stop.  The traffic stop involved a young man from Gainesville Florida named Lucas Jewell, who showed deputies riding in an armored vehicle the middle finger, a gesture generally understood by a majority of Americans to be an expression of constitutionally-protected free speech.

The statement release by the PR department reads:

On Monday morning, April 13th, the Alachua County Sheriff’s Office was made aware of a video circulating on social media. The video showed a driver that had been pulled over by members of our SWAT team who were driving an armored vehicle. These deputies were returning to the station from working a SWAT related detail, the University of Florida’s spring football game.

We fully recognize the serious allegations brought forth by the driver and many others who have posted their feelings on Facebook. Sheriff Darnell has personally contacted the driver and assured him that a complete investigation will occur. The Office of Professional Standards has opened an internal investigation into this incident, specifically to look at violations of any directives or laws. I can assure you that we are quite aware of the concerns of not only the driver but all Alachua County residents.

As the investigation runs its course I ask you to be patient and refrain from making random posts. There will be a thorough investigation and the facts will lead us to a proper conclusion.

At one point, Mr. Jewell was even ordered to not record one of the police officers because his phone could be a firearm, or “because there are firearms that are made of devices like that.”

In an statement made to journalists, the Public Relations officer stated,

“We fully recognize the serious allegations brought forth by the driver and many others who have posted their feelings on Facebook. Sheriff (Sadie) Darnell has personally contacted the driver and assured him that a complete investigation will occur. There will be a thorough investigation and the facts will lead us to a proper conclusion.”

The officer did not clarify who is carrying out this investigation and what the scope of the investigation is, however a full copy of the incident report files by the cops who performed the traffic stop was made available and it can be read here: SWAT-incident-report

As these police officers were property informed at the time of the stop, an obscene gesture directed towards them is considered protected speech and has been cemented by a number of federal court cases over the years.

This did not deter the cops from pursuing various accusations against Mr. Jewell and his girlfriend, none of which were sound or reasonable.  Fortunately, a crowd started to gather and take pictures which prompted Mr. Jewell to start chanting, “Tell me what a police state looks like? This is what a police state looks like!”  After this the cops gave him a warning for an “improper hand signal” and let him go.

Regardless how one feels about making an obscene gesture towards police officers, the bottom line is that such a gesture is a protected constitutional right and nobody should be harassed for it, especially by heavily armed thuggish individuals riding around in what appears to be a tank through downtown Gainesville, Florida.

As a journalist who has investigated hundreds of police brutality cases I am not holding my breath for an outcome where any of these officers will be disciplined for the abuse of taxpayers’ resources, for intimidating someone over exercising free speech or even attempting to manufacture false charges against him.  It will hardly come as a surprise to anyone when this department investigates itself and finds no wrongdoing.

Perhaps we will pleasantly find out that Sheriff Sadie Darnell has a backbone and is willing to rid her department of individuals who are readily willing to stomp on the constitutional rights of Americans and are even proud to put their tyranny on display.

The original video provided by Mr. Jewell is below: