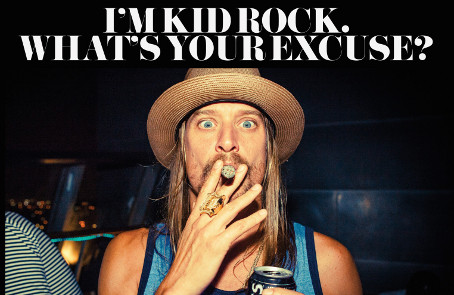 The Oakley Police Department in Michigan has on file an application for Robert James Ritchie, aka: Kid Rock, to serve as a reserve officer on their force. This is despite the fact that he was not listed in public records naming reserve officers. Yet some skeptics wonder if Ritchie is among the cash contributors to local police and is seeking preferential treatment in what has recently been recognized and deemed as as pay-to-play policing.

Pay-to-play policing came into national attention recently when a wealthy 73 year old insurance agent who worked as a reserve deputy shot and killed suspect Walter Scott, though he claims he was just going for his taser. Deputy Robert Bates, who was a reserve officer for the Tulsa County Sheriffs Department in Arizona, was a wealthy local who donated to police, leaving skeptics to suspect the department had hired the obviously incompetent man in a pay-to-play scheme. The scheme is simple- wealthy locals who want to live out some childhood delusion of cops and robbers in real life donate large amounts of money to law enforcement, who then favor their applications as local reservists.

The Oakley Police Department’s Reserve Unit includes a list of high profile names including doctors, lawyers and other professionals, as well as Miami Dolphins player Jason Fox. The publicized list of names, however, is far smaller than the actual list. Until recently even Kid Rock did not appear in any public records as a reserve officers, which highlights a disturbing lack of transparency by local officials.

To make matters even worse, there is absolutely no transparency whatsoever about donations to the Oakley Police Department. While it is known that the department receives large sums from private donors, it is rarely ever revealed who has donated money and how much. Aside from the numerous issues that such secrecy entails, it has left some wondering how massive the local pay-to-play policing scheme really is. While it is claimed that reservists often participate only in trivial matters like checking Halloween candy or roasting wieners at community events; it is possible that a reservist may be used in the line of active duty as a law enforcement officer, if deemed necessary.

The lack of formal and transparent policies regarding reservists and cash donations is likely a problem throughout the country. Although it is just coming to light after recent events, pay-to-play policing is likely a common occurrence that reveals another way by which the wealthy, influential and powerful have infiltrated our public systems for their own purposes. Not only should we be discouraging the acting out of childish fantasies that LEO’s seem to be transfixed by, but we should be ousting any elites who think our justice system is just another toy for them to act out on their violent, juvenile, sometimes racist and/or self-aggrandizing and narcissistic agendas and desires. There exists far better outlets in any community for the wealthy, influential, and powerful to spend their money while stroking their egos.