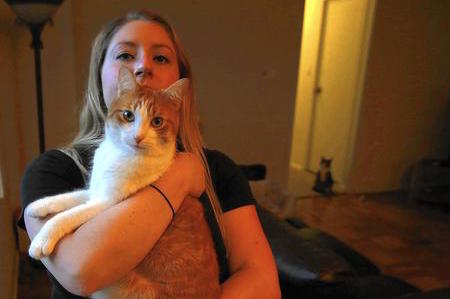 A Los Angeles woman is claiming that upon returning home she found her cat seriously injured after an LAPD K9 Unit had been allowed to search her apartment. The incident occurred on March 10th after officers searched her entire apartment building with a police dog, while looking for a burglary suspect. The cat suffered multiple injuries, including puncture wounds, bruised lungs and torn nails that required veterinary services exceeding $1,000 dollars. Alissa Kirby, the owner of the cat, plans to file damages with the LAPD, who have not yet given her an official explanation.

“I think as officers of the law, they should be accountable and they should be held to a higher standard than ordinary citizens because they’re supposed to be protecting us. Not invading my home, attacking my pet and then leaving with no word. Accidents happen, but they need to have a protocol for dealing with this type of thing. And if they do, they need to revise it because it’s clearly not working.”

Aside from a lack of transparency and accountability, K9 Unit Leader Lt. Michael Carodine has essentially denied the incident ever happened in his remark, “that didn’t even occur.” He claims that in his two years running the K9 division that only once has a police dog made contact with another animal and that such situations are nearly impossible.

“Even though the dogs are trained a particular way, the bottom line is it’s still an animal and animal instinct does have a tendency to kick in. But that’s why we put so much time and effort into how we train our dogs so it’s not an issue.” Meanwhile the pet owner’s veterinarian says that the wounds are all consistent with an attack by a dog. Police also acknowledge that a K9 dog entered her apartment on the day her cat received its terrifying injuries. Now, I may not have gotten a degree in law enforcement from some accelerated course, affordable, accreditation mill, but I am gonna go out on a limb and say that the incidences have a pretty strong chance of being connected. Since I personally slayed all of the Los Angeles area werewolves that walk through walls back in 2009, that can safely be ruled out. Unless some ghastly chupacabra poltergeist makes another appearance, I think it is safe to say that the LAPD allowed their animal to attack another animal during the course of a questionable search and are trying to cover up another one of their numerous acts of misconduct.