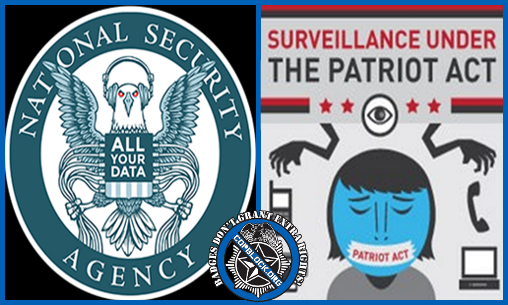 The National Security Agency and the Federal Bureau of Investigation held secret briefings with a House Intelligence Committee on Tuesday and Wednesday, to talk about preserving sweeping surveillance powers granted to them under The Patriot Act, the Guardian reports.

Section 215 of The Patriot Act, which is the authority claimed by the NSA, since 2006, for its ongoing, daily bulk collection of US phone records, is set to expire June 1.

The ACLU points out:

Section 215 of the Patriot Act authorizes the government to obtain “any tangible thing” relevant to a terrorism investigation, even if there is no showing that the “thing” pertains to suspected terrorists or terrorist activities. This provision is contrary to traditional notions of search and seizure, which require the government to show reasonable suspicion or probable cause before undertaking an investigation that infringes upon a person’s privacy. Congress must ensure that things collected with this power have a meaningful nexus to suspected terrorist activity or it should be allowed to expire.

The section also authorizes the NSA and FBI to indiscriminately pull business records.

The FBI warns that the expiration of Section 215 will cause the agency to lose access to investigative leads for domestic terrorism and espionage, such as credit card information, hotel records, and more.

An announcement for legislators, sent by intelligence committee chairman Devin Nunes and Georgia Republican Lynn Westmoreland, said the secret briefings were to provide “an important opportunity to hear directly from analysts and operators who use Section 215 as part of their daily mission to protect the Nation from terrorist attacks.”

Kentucky Republican Thomas Massie was not impressed by the briefings however, and said the committees questions about the constitutionality and legality of the section in question, “were answered with statements of efficacy.”

“We said, ‘How can this possibly be legal?’ and they would say, ‘this program works great, here’s how it’s helping us catch terrorists,’” Massie said.

Massie co-sponsored a bill introduced by Wisconsin Democrat Mark Pocan last month that would repeal the Patriot Act entirely, as well as a landmark 2008 expansion of the Foreign Intelligence Surveillance Act.

The Surveillance State Repeal Act also carries protections for national-security whistleblowers against retaliation and makes probable cause the basis for foreign-intelligence surveillance of an American or someone on US soil. The bill faces an uphill battle, with only ten current co-sponsors.

“It’s very long odds, but it’s a statement about what needs to happen. It’s a stronger Freedom Act that’s not going to get watered down,” Massie said.

After the NSA briefing on Tuesday, Massie said he sees a “tremendous opportunity” for surveillance reform, adding that its up to the newest members of Congress to stand up and make sure the Patriot Act provisions expire.

“A lot of it is going to hinge on the freshmen,” Massie said. “Right now, as far as I can tell, the select intelligence committee is making a real strong play to persuade the freshmen that all of these public concerns are overblown.”

Members of the intelligence and judiciary committees in both chambers are still negotiating in secret to determine how to reauthorize Section 215. Indiana Republican Senator Dan Coats said the shape of a reauthorization was under “ongoing discussion.”

A different congressional source told the Guardian, that the Senate GOP leadership was “clinging to a pipe dream” if they were hoping for straight re-authorization.