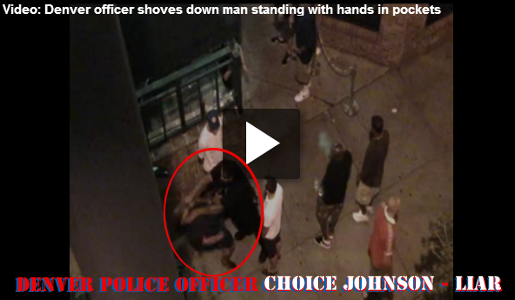 Denver police officer, Choice Johnson (yes, that’s correct), is now on a 30 day suspension after video surveillance proves he lied on his police report and used excessive force on a man. According to ABC’s affiliate out of Denver:

A Denver police officer has been suspended for 30 days without pay for shoving a LoDo bar patron backward down some stairs, according to a disciplinary order.

The report indicated that Johnson falsely portrayed the bar patron as taking a fighting stance toward the officer, when a surveillance video showed the man was standing with his hands in his pockets as the 260-pound officer violently shoved him backward down some stairs. (The video can be viewed below. The officer shoves that man at 4:23 into the video.)

I hate to sound like a broken record here, but film, film, record, and record the police. Did you notice how it went from a conversation to I’m pushing you down the stairs in no time flat? Folks need to be prepared to film the police. This means practicing it as well, because you really don’t want to wish you had video when you don’t. Thankfully for this man, there was this halo video. It’s the worst feeling to have to tell someone, who’s had a bad police experience, that there’s little you can do when there’s no video evidence. Sadly, we’re still in an era where a police officers word means more than the word of someone who doesn’t wear a shiny badge and a costume to work.

Hopefully, that will change as we continue to spread the message that, “Badges Don’t Grant Extra Rights.”