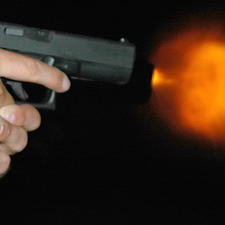 Wednesday, Jonesboro, AR Chief of Police, Rick Elliot, publicly identified Patrolman First Class Heath Loggains of the Jonesboro PD as the man who took the life of 31 yr old Christopher Grant Finley on Tuesday night after a dispatch call led police to his home, where they state he was allegedly shouting in his front yard with a baseball bat in hand.

According to the Jonesboro Police Department, when officers arrived Mr. Finley went into his home, not allowing the police to come in. They say he opened the door to speak with the officers, but then entered his home once again with Officer Heath Loggains in pursuit.

In the press release by the JPD it states:

The suspect tried to shut the door on the officer and as the officer pushed open the door, the man struck the officer on his arm with a machete. The officer then drew his weapon, firing several times at the suspect. However, the officer did not know if the suspect had been struck by the gunfire. A tactical team with Jonesboro police was notified and made entry into the home early Wednesday.

Christopher Finley was pronounced dead at the scene.

The officer who shot Finely was taken to a nearby hospital and has said to be treated for “blunt force trauma” from the scene. As far as we know from the information the JPD has given, there were no stab wounds, as would normally be seen by the blade of a machete. It is not public knowledge yet as to exactly how Loggains was wounded or where the wound was located. He was released, and is now on paid, administrative leave while the Jonesboro PD and Arkansas State Police do an internal investigation.