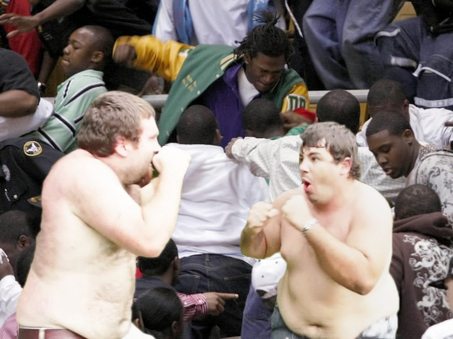 *With the highest form of flattery, “CopBlock” was the target of this satire piece published at Blights and Sirens by AC*

Minneapolis, MN – Police were called to the Minneapolis Convention Center last night after a large fight erupted during a convention for members of Cop Block, an activist group that calls for police accountability.  Police say they made 29 arrests and spent four hours restoring peace to the facility. Self-described anarchist Kirsten Rockefeller who was at the convention said in an up-talky nihilist voice that she won’t be back next year.  “So I had to like unblock the cops from my iPhone and call them when this big militia guy in a Guy Fawkes mask picked up my friend and was literally swinging him around like an unwilling human club.  He was just swinging him at my other friend in La Raza and trying to hit him,” said Rockefeller.  “I was like, this is just chaos, why isn’t anyone stopping this?”

Kirsten said she was relieved when police showed up to restore order, but was upset at some of the officer’s conduct. “So some of the cops were just like filming us on their phones and laughing,” she said.  “So I just feel like – it was like unprofessional and not very oathful.”  The Minneapolis Police Department has yet to comment on the alleged misconduct but assures us that they are looking into the matter.

Police say the melee left 12 people hospitalized, which included one police officer who fell ill from the body odor that filled the center.   “It was pretty bad,” said Captain Richards of the Minneapolis Police Department.  “Luckily, most of my officers had their gas masks on hand.  It smelled like marijuana being smoked out of an infected toe in there.”

Officials from the Convention Center said the facility will be closed for about a week while a HAZMAT team deodorizes the center and finishes picking up all the body piercings and ear lobes that were left behind.