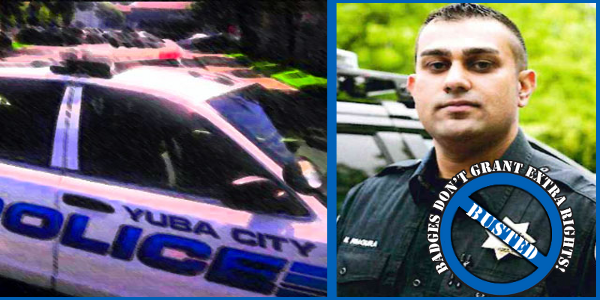 In yet another example of blatant drug war hypocrisy, a police officer in Yuba City, CA has been arrested for being involved in a cocaine trafficking scheme.

Harminder Phagura, 35, was arrested following a four-year long Homeland Security investigation.  He’s charged with conspiring to possess a controlled substance with intent to distribute and use of a communications facility in narcotics trafficking activity.

According to the complaint, Officer Phagura monitored police radio frequencies for his relative’s drug ring and even participated in practice drug deals to determine the ring’s ability to evade law enforcement.

“There was communication back and forth from Harminder Phagura that the coast was clear … these sorts of things,” said Benjamin Wagner, U.S. Attorney for the Eastern District of California.

Allegedly, Phagura would warn the drug dealers by texting them, “hot”.

While his relative sits in jail, Officer Phagura was released on $100,000 bail.  Being arrested on federal drug charges hasn’t interfered with Phagura’s police department paycheck either, he’s on paid administrative leave.

“Our men and women of law enforcement work hard daily to earn the trust and cooperation of the citizens we serve. Events like this erode that trust and confidence for those who so proudly wear the badge and serve with honesty and integrity.”

I think the police chief has it all wrong though.  It’s not these types of events that have eroded trust in law enforcement. Regularly kidnapping and extorting people who commit non-violent “crimes” is why police officers don’t have integrity.  Serving as a gunman for an inherently violent institution is why cops don’t have integrity.

I just wish every drug dealer had a look-out as efficient as a police officer; with access to the tools necessary to evade police contact.  But they don’t, and they pay the price for it when cops bust down their door and shoot their dogs, or burn their children with tear gas grenades.