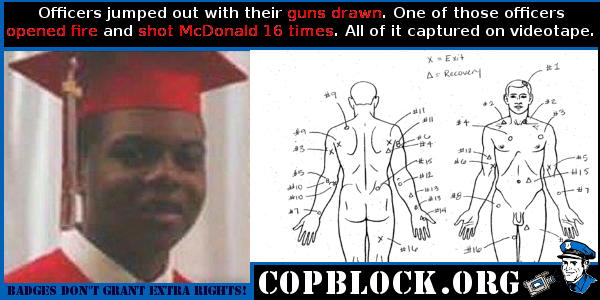 Months after a teenager was shot 16 times by a Chicago police officer, the city is still refusing to release the dash-cam video of the fatal incident despite approving a $5 million settlement for the family Wednesday.

The Chicago City Council approved the settlement even though the family of 17-year-old Laquan McDonald didn’t file a lawsuit, leading many citizens to speculate on the brutality of the footage.

Some members of the council said releasing the video could spark the kind of angry protests seen elsewhere around the country. Alderman Danny Solis said making the footage public could “fan the flames.”

The October 2014 shooting followed a police chase that ensued after a man called 911 to report that a knife-wielding suspect on Chicago’s Southwest Side had threatened him and was attempting to break into vehicles in an Archer Heights trucking yard at 41 St. and Kildare.

Two police officers responded to the call and found McDonald about a block away holding a knife in his right hand, police say.

After a short foot pursuit one officer pulled his patrol car in front of McDonald to block his path. The teen allegedly punctured one of the vehicles tires with his knife.

Another squad car pulled up beside, then in front of McDonald and both officers jumped out with their guns drawn, police say. One of those two officers then opened fire and shot McDonald 16 times, all of it captured on videotape.

The shooting officer contends that McDonald was moving toward him and that he opened fire to protect himself.

A spokesman for the Cook County Medical Examiner’s Office said the autopsy found that McDonald was shot in the chest, neck, back, arms and right leg.

He was pronounced dead at Mount Sinai Hospital about an hour after the shooting. Alderman Howard Brookins said fear of demonstrations or riots shouldn’t drive the decision to release the footage.

“I need this to stop, [and] if you don’t show the video and this continues to happen then we’re still heading down that path,” Brookins said.

The unidentified officer that did the shooting has been on administrative duty since the incident.

The FBI said Monday that they have launched a federal criminal investigation into McDonald’s death.