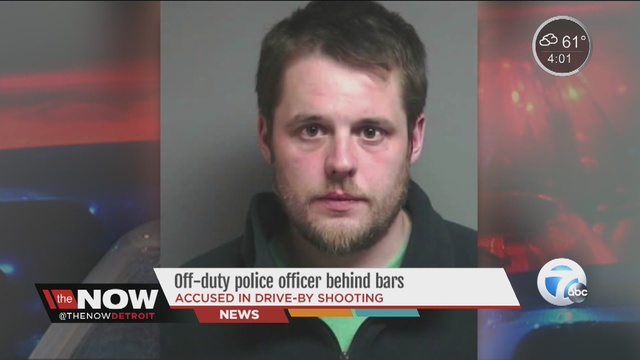 A police officer in Detroit has been arrested for a drive-by shooting.  Officer Clifford Gullion, 32, is charged with two counts of discharging a weapon into a building and two counts of felonious use of a firearm.

Gullion is suspended without pay and faces 12 years behind bars if convicted. He’s being held at the Macomb County Jail on $250,000 bond.

Macomb County Sheriff’s Department is conducting an investigation into the incident.  Sheriff Anthony Wickersham said in a press conference that the shooting was related to officer Gullion’s feelings getting hurt:

detroitnews.com:
Gullion of Ray Township was arrested early Thursday morning for allegedly firing five shots from a .40 caliber handgun after his wife was involved in a dispute with the homeowners, Macomb County Sheriff Anthony Wickersham said during a press conference. No one was injured.

Wickersham added it is not known if the handgun was department issued.

“It is extremely bizarre,” Wickersham said of the crime. “It sounded like someone’s feelings got hurt. He took it upon himself that he was going to send a message to those individuals … that being firing into the house.”

According to Wickersham, Gullion’s wife provides in-home medical care to the 62-year-old female who lives with her 61-year-old husband in a house in the 16000 block of 29 Mile near Romeo Plank.

The sheriff said a third party told Gullion’s wife the husband made disparaging remarks about her. When Gullion was told of the comments, he began texting and calling the older couple Wednesday evening.

Wickersham said they received a call about the shooting at 2:12 a.m. Thursday. After investigating, deputies went to the officer’s home, where he agreed to go to the sheriff’s office for an interview.

Gullion admitted to firing the shots and was arrested following the interview.  Nobody was hurt in the shooting, and it’s not clear what was said that hurt Gullion’s feelings.  Detroit Police Chief James Craig said Gullion has been with the department since 2009 but has been on medical leave “for several months”.

It seems conflict resolution wasn’t Clifford Gullion’s strong suit which would make one wonder why he was ever a police officer in the first place.  Committing a drive-by isn’t something most people do when they’re upset over a verbal dispute, but it isn’t surprising that a police officer would react to a situation with extreme and belligerent violence.

I presume he won’t be protecting or serving anyone in the near future.