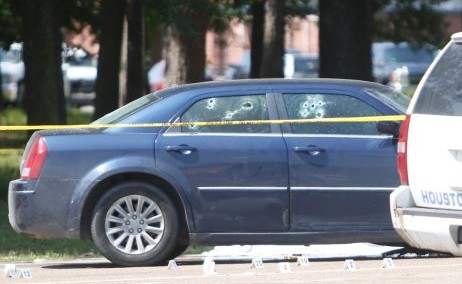 A police chase in Harris County, Texas ended with the fatal shooting of the suspect, Wednesday.

Police say the chase began about 10:40 a.m. in the Crosstimbers area of US-59 when Houston officers tried to pull over 41 year old Frank Ernest ‘Trey’ Shephard, III for “suspicious activity,” including two unsafe lane changes.

As officers approached the car, a chase ensued, which was caught on camera by a trailing helicopter.

The footage shows officers pursue Shephard through northeast Houston along Beltway 8, and then onto Wallisville Road where the man runs through an intersection at Castlegory Road and strikes two vehicles.

Shephard gets out of his blue Chrysler 300 and indecisively appears to give up, the footage shows.

Officials say the officers told him to raise his hands before two police officers opened fired 10-12 times after Shephard appeared to reach back inside his vehicle.

Shephard died on the scene.

18-year-old Andrea Espino was driving one of the cars struck by Shephard. She was listed as being in ‘good condition’ after being taken to a nearby hospital for minor injuries.

“Our police officers [aren’t] NASCAR drivers. They are not trained and taught to ram vehicles, spin vehicles out of control,” McClelland said. “While I can appreciate peoples concern, until you’ve been in a police officer’s shoes and been in a high speed chases it’s really hard to prejudge them of what they should or should not do.”

Officials argue it was necessary to use deadly force against Shephard, because he called 911 claiming to have a child in the car he was threatening to hurt.

There was no child in the car, but why on earth would police, who were operating under the auspices of that information, fire over 10 shots into it? Doesn’t seem like they were too concerned about ‘hurting’ the alleged child to me.

“It’s rough. It’s rough,” said Shephard’s uncle, Chris. “You’re not supposed to run, and he reached back in the car, but I don’t feel like they should have shot him, I mean he didn’t come out with a weapon.”

Police have produced no weapon from the scene.

“You know it hurts. He is a good person that does not deserve to be laid out here like that,” said Shephard’s cousin Lushondra Glover.”He was loved, he was life. He was a really good person and everybody has their mistakes, but overall a hard-working person.”