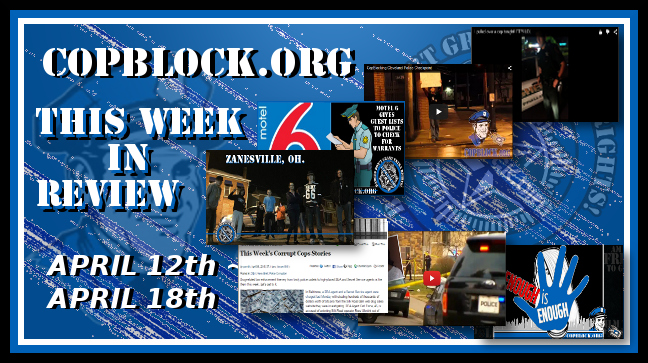 To help keep folks up on all the police related stories, events and more each week we post a “CopBlock Week in Review”. Each week the review highlights the stories published at CopBlock.org, short stories about other CopBlock activities, this week’s corrupt cop stories and more. So without further ado, lets get into this week’s review.

Ohio Copblockers have been really holding the police accountable this past week (and a little into the week before). Starting with the arrest of myself, which lead into a night of CopBlocking in Zanesville, and concluding with the CopBlock of a Cleveland Checkpoint (see video below), see here, Ohio CopBlockers (especially DEO, Jason, Tom, Lisa and myself) have been quite busy. On top of these great activities we’ve also CopBlocked Downtown Cleveland and a Medina Checkpoint a few weeks ago.

If you’re in Ohio, get connected with GreaterCleveland CopBlock; Zanesville CopBlock; Youngstown CopBlock and more via the CopBlock Groups page.

I PULLED OVER A COP TONIGHT: Adam Bocanegra gave a local sheriff a taste of his own medicine. After witnessing the sheriff speed down the road Adam followed him in order to issue him a ticket. After a short interaction, Adam decided to give the sheriff a warning, no joke, see for yourself here.

MOTEL 6 WILL GIVE YOUR PERSONAL INFORMATION TO THE POLICE: Did you know that when you check into some Motel 6 locations they might be giving your personal information to the police, without your knowledge! That’s the news coming from Motel 6 Executives our of Rhode Island this week and after breaking the story, found that others might be doing the same, see here. So make sure you ask when checking into a hotel if your information is going to be given to the police without cause.

COPBLOCKING THE ZANESVILLE POLICE: After I was released early from the Zanesville City jail about 15 – 20 of us spent Saturday night CopBlocking the Zanesville police. The video below has nearly 10,000 views this week and is probably due to Herb’s raw nature in dealing with the police. This isn’t the last you’ll hear from Herb or Zanesville, as I plan to spend the rest of the month in the area helping Herb get his cameras back and further hold the ZPD accountable.

Each week share the stories about corrupt cops across the country published weekly by StopTheDrugWar.org. Here are a couple stories from the previous week.

In Towson, Maryland, a former Baltimore County police cadet was sentenced last Wednesday to four years in prison for stealing drugs from the department evidence room. Nicholas Ishmael, 21, had pleaded guilty in January to felony theft and possession of oxycodone with the intent to deliver. He had been arrested last June after an investigation into missing drugs pointed toward him. He was carrying $40,000 in cash when arrested.

In Frankfort, Kentucky, a former Franklin County narcotics officer was sentenced Monday to 16 months in prison for stealing cash, jewelry, and gift cards from drug dealers. Matthew Christian Brown, 32, was the county sheriff’s lead narc until December 2012 and enriched himself during drug busts. In one August 2012 case, he confiscated guns, drugs, and $32,000 in cash, but only logged the guns, drugs, and $18,000 into evidence, keeping the other $14,000. In another case, he stole an $11,000 ring and $3,000 watch from a drug dealer. He kept the ring, but sold the watch back to the dealer for $800 and kept the cash. He was charged with embezzlement, illegally distributing anabolic steroids, wire fraud, and lying to the FBI.

In Titusville, Florida, a former Titusville police officer was sentenced Tuesday to 10 years in federal prison for participating in a drug deal. Richard Irizarry, 46, went down after befriending a DEA snitch and telling him he wanted to get into the drug business. Irizarry also helped the informant avoid detection by DEA officers. He was charged with attempting to aid and abet the distribution of cocaine and was found guilty in January.