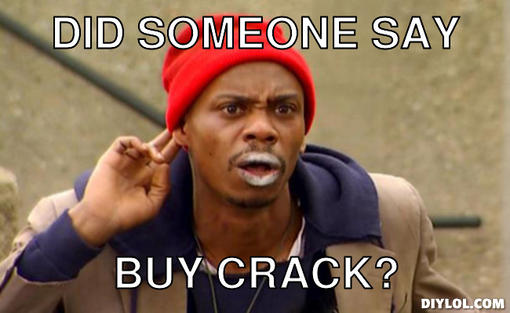 Christopher Heredia, formerly of the Sweetwater Police Department, was arrested buying crack from a drug dealer in South Miami-Dade. This wasn’t his first arrest either, as Heredia had already been relieved of his duties for stealing licenses plates to skip out on tolls. According to West Miami-Dade:

A Sweetwater police officer has been arrested after authorities said he bought crack cocaine from a dealer in South Miami-Dade. Police say Christopher Heredia, 25, bought the cocaine during a “hand-to-hand transaction” in the parking lot of a Walgreens on Southwest 114th Avenue and Quail Roost Drive on Thursday afternoon.

As Miami-Dade detectives pulled him over, Heredia appeared to tried to hide the drugs. He told the detectives he was a “P.O.” – shorthand for police officer.

“The crack is not for me, it’s for my wife,” Heredia blurted out, according to his arrest report.

There are some out there that say, “When you need a police officer call a crackhead.” We’ll….. I guess that works out just fine now, but seriously. The war on drugs is what’s ridiculous here. Yes, crack and some other drugs are most certainly bad for you but a jacked up police state raging to fight the war on drugs is worse. This officer was already going to be ‘officially’ fired for his involvement in the troll pass sting and now he finds himself in the same position many others do once in the system. Stuck. This victimless crime of possessing, or purchasing, illegal substances will now be compounded into his previous troubles. Where some would get a slap on the wrist or fine, this officer will – if treated like others – find himself in a jail cell soon.

Over the next few years, especially if on probation, he’ll be subjected to house checks, curfews, financial payments to the state, urine analyst and more. Any violation, or refusal of such will once again lead to a jail cell. This could go on for the rest of his life like it does millions of others each day. The drugs are not the problem, the war against them is. Let’s rethink this insane action and end all prohibition. See the flower video for further explanation of how the war on drugs creates violence.