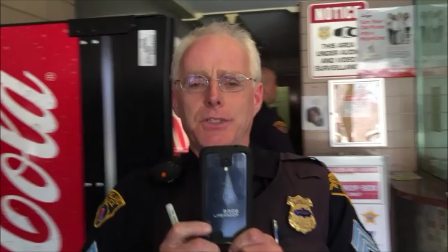 I was asked by my friend and fellow activist, Don Bryant, to come to a meeting where people would be speaking about the body camera program for the Cleveland Police and their usage. I was delighted to hear it was not just a bunch of folks praising the use of said cameras, but the room full full of skeptical, dissension. One speaker, Shadid Buttar, an attorney for the Bill of Rights Defense Committee was particularly critical of the new policy, and a CopBlock fan as it turns out.

I had a brief conversation with Mr. Buttar after, in which we agreed to keep in touch. He agrees that body cameras are not the solution to police brutality and lack of accountability. He agrees a more fitting way to achieve these goals is that people, ordinary people, like you and me, go out and film these police in the streets. Let them know that we have the right to do it, and we will exercise this right often! Teach these officers that “Badges Don’t Grant Extra Rights!”

As I looked out the window of the library where this meeting was being held, I noticed that right next door was a police station. I turned back to hear my friend Marva ask, “How do citizens file complaints and deal with the thin blue line?” The people on the panel the question was directed at didn’t seem to understand what she was asking, but I took that question to mean that when people do try to file complaints against these officers, that they are met with hostility, intimidation, and sometimes, threats of arrest. I would tend to agree due to the number of videos on CopBlock showing the very thing she was talking about. I decided to take a walk over to the police station to video it for myself, so I could show the panel of speakers how police deal with folks who just wanna know how to file a complaint against an officer.

I was greeted at first by a very cordial officer named Munez.(Sorry if Im not spelling it right) I asked him about filing a complaint on an officer and after a minute of back and forth about signing in, he gave me a complaint form to take home with me. I was just about to leave when Sgt. Mone came out, cell phone camera in hand. He seemed to not know how to operate his own camera, but was filming me and asking me questions nevertheless.

What’s your name? Come sign in for me?” And so on. At one point he puts his hands on me and tries to guide me toward the sign in sheet. I had the right to defend myself at that point but chose to just w

arn him to take his hands off! You see? This is the response to people who just want to ask questions of the police that patrol the streets of Cleveland, often viciously.

Harassment, intimidation, and threats of arrest are what folks have to deal with just to file a complaint. What if I had actually had a complaint, was under stress from the encounter in the first place, and I got this reaction when I came to file a complaint? I probably wouldn’t follow through with filing the complaint. It is only because I am who I am and have chosen not to be afraid of these shitbags anymore, that I am able to get over that and still follow through. Normal people who don’t have interactions with the police regularly will tend to say “fuck it” and consider the matter closed. They will not go back, or ask to speak to a supervisor, or anything else. They will simply leave pissed off.

So what are the people of Cleveland supposed to do? Just simply trust the city council and the police department when they say that the body cameras are coming and they will solve these police brutality problems? As you can see from this video, some officers don’t give a shit they are on camera. Some of them want to be on camera. It causes some of them to act like snot nosed punks trying to get a reaction from someone who is simply trying to film a process that they put in place! Until this type of intimidation and harassment stops, police brutality will continue to be a problem, with or without body cameras.

Protect yourselves by filming your interactions with police. Like I told that room full of people, “Don’t wait for them to implement policies and procedures and issue equipment. Film them yourselves. You all have cell phones and tablets and things with cameras in them. Use them! Don’t wait for them to offer you a solution to a problem they created in the first place!”