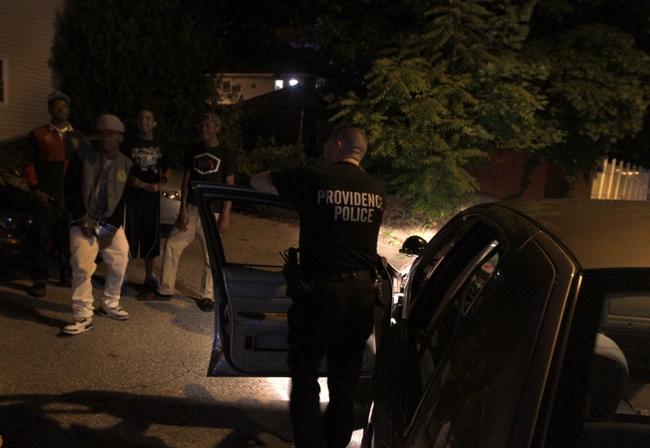 PROVIDENCE, R.I. — Members of the Providence Police Department’s gun task force are on desk duty following complaints from a community activist and other parents.  Kobi Dennis says the task force is “a plague” on the city.

Dennis, founder of Project: Night Vision for city youths, who works in partnerships with the Providence and State Police, said he is angry about how his 18-year-old son and two teenage friends were treated by the task force when they were detained without probable cause.  According to Dennis, the three boys were walking down the street when two plainclothes officers jumped out of an unmarked vehicle and demanded to know “where are the fucking guns.”  The boys were frisked and claim one of the officers threatened to break their jaws when they asked if they were free to leave.  They were unarmed.

Dennis says he’s not the only one with complaints about the “jump-out boys.”

“They’ve been terrorizing us for 10 years,” He said.

Public Safety Commissioner Steven M. Paré placed the eight-member unit on desk duty. “These are serious allegations,” Paré said.  “We need to get to the bottom of what happened.”

The officers have long been dubbed the “jump-out boys,” because they frequently jump out of their vehicles to check people. The police see it as pro-active work: gathering information, talking to gang members and those just released from prison, and frisking people who appear to be armed.

Dennis says the task forces’ tactics are harassment and the focus on guns “gives them carte blanche to do whatever they want to do,”.

“This is the last straw.  My hope is they’re considering disbanding the task force — no one’s like ‘they’re doing great.’  I was told by everyone — top down – that they ‘didn’t know who these guys were,’ like they had no control over a rogue police arm.”

“My last interaction with the [task force] was at gun point two years ago, I let that go, they’re just doing their job in broad daylight, but the other one I didn’t let go because I was with my mom.  Here I was working with police, and I was jumped,” said Dennis.

“Right now, we’re going through the process.  There needs to be accountability.  I know they’ve got to look for guns on the street, but they need to treat people with respect and dignity.”

The Fraternal Order of Police say Paré’s decision was a “knee jerk reaction” to “politically-motivated and biased radical activists,”

“The consequences of the combined actions of the police administration, City Hall leadership and these activists has been to decrease the safety of the citizens in the city of Providence due to the disruption of police activities, to increase the dangers posed to our police officers and to lower morale among the ranks,” the police union wrote in a statement.

But Paré said searches will be documented moving forward, and the entire task force will receive more training.  He also said they will be required to wear uniforms that “better reflect their role as police officers”.

Six of the officers are already back on the streets harassing teenagers, while two others remain on administrative duty.