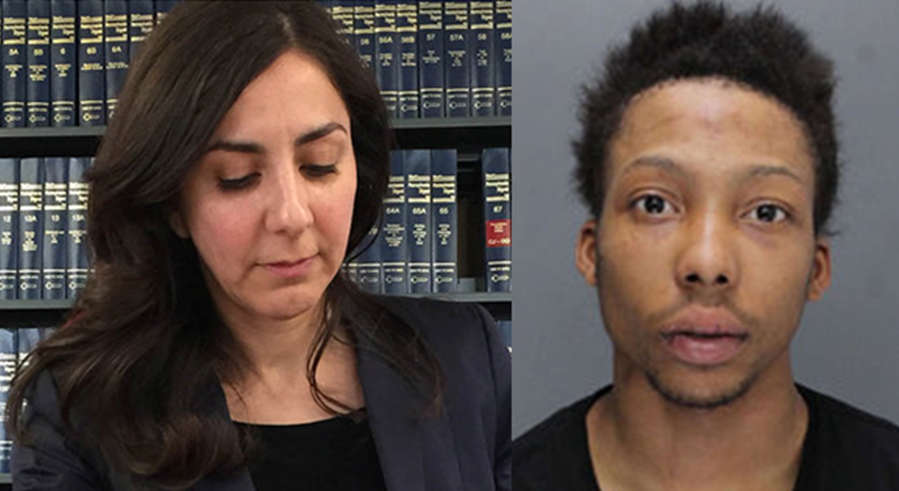 At least six Philadelphia police officers jumped and beat a defendant and his female public defender in a hallway outside a Criminal Justice Center courtroom, Friday.

The incident started about 11 a.m. when 22-year-old Anthony C. Jones was booted by the court after refusing to remove his hat, the mans assistant public defender, Paula Sen said.

In the hallway, Jones yelled and cursed, and Sen hurried to defuse things before about a dozen officers stood and gathered down the corridor, lawyer Richard Hoy, who was sitting on a nearby bench when the violence erupted, said.

Hoy said that there appeared to be something “mentally wrong” with Jones but that assistant public defender Sen had him “75 percent calmed down.”

“A very large officer got into [Jones’] face and was yelling at us,” said Sen, who weighs just 105 pounds and stands 5-foot-3. “I was scared for [our] client. I stood directly in front of him with my arms outspread. I said: ‘Everybody, calm down.’ I was just trying to get people to act like grown-ups.”

Instead, Officer David Chisholm lunged and swung his arm and punched Sen in the back of the head, knocking her to the floor.

“I think the intent was to put [Jones] in a chokehold and take him to the ground,” Sen said.

After Jones was taken to the ground, Sen says Chisholm and two other officers punched him several times as more officers piled on, handcuffing him and dragging him to his feet.

“He was bleeding fairly profusely and the cops continued taunting him,” Sen said.

After the skirmish ended, Hoy says when he told the officers that there was no need for violence, “[an] officer told [him] to ‘mind [his] own fucking business.’ ”

When one of Sen’s supervisors arrived to investigate the incident, Chisholm allegedly refused to identify himself.

“I find it troubling that the officer would refuse to give his name and make statements like that in a public courthouse,” Jordan Barnett, chief of the Defender Association’s Southwest Division, said.

Barnett says after confronting the officer, Chisholm said, “If you let these animals act like this, this is what happens… If you keep pushing this, we are going to have a conversation.”

A police spokesman said he was unfamiliar with the incident and that the melee was not caught on camera.

“While I don’t have the facts surrounding the incident you’re referring to, the department investigates all complaints filed with IAB [internal affairs], and this will be investigated just the same,” Lt. John Stanford said.

The officers will not be charged, DA spokesman Cameron Kline said. Kline disputes witnesses’ version of events, saying Sen wasn’t punched but rather “fell over.”

Sen said she was “deeply offended” that Kline denied she was assaulted and says she was treated at Thomas Jefferson University Hospital for bumps and bruises.

After the incident, Jones was not taken to the hospital despite heavy bleeding. He is now in jail on a $2,500 bond with the additional charges of terroristic threats, resisting arrest and disorderly conduct, court records show. He had been appearing in court for charges received during a February incident earlier this year.

“The officers overstepped their authority,” Hoy said. “[Jones] was no threat to anybody. He was loud and obnoxious. He wasn’t threatening them – or anybody. The officers are there to protect people, but they didn’t protect anybody. They abused their power.”

Chisholm is a 13-year police veteran who was accused of brutality in a 2006 federal civil-rights lawsuit.

Internal Affairs will be reviewing the incident.