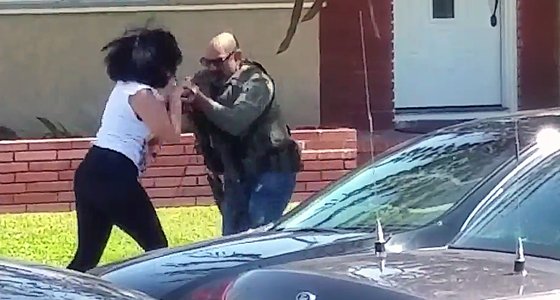 Video has emerged showing a U.S. Marshal in California armed with an assault rifle, violently grab a woman’s video recording device, smash it on the ground, then stomp and kick it, Sunday.

The footage shows the bystander attempting to speak with officers standing in front of a home while filming with a small camera or cellphone before one of the officers runs up to her and snatches it from her hands.

After destroying the device and the officers storm off, the woman turns to another woman across the street and asks nervously, “Did you record that?”

South Gate Police Chief Randy Davis confirmed to local reporters that the unidentified officer involved was not a member of his police force and was instead a U.S. Marshal working with local officers.

Officers from multiple agencies had been responding to a report of a biker gang meeting at a bar in South Gate, local news sources say.

Apparently the woman was recording police as they were making arrests nearby which resulted in a confrontation between one of the officers and an alleged member of the gang.

It is unclear at this point if the bystander was affiliated with those being arrested.

The U.S. Marshals and the Los Angeles County Sheriff’s Department say they have launched an investigation into the incident.