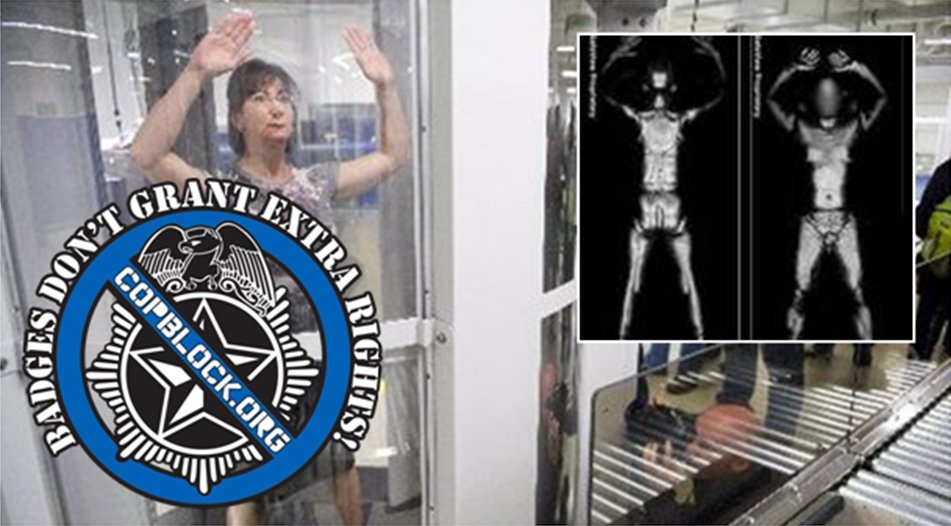 There is seriously something wrong when the government demands its citizens be molested or to undergo x-raying and be viewed naked, in order to travel.

Further, people have legitimate health concerns with regard to being x-rayed. The TSA says it’s safe now, but the government is far from omniscient. The government taught the virtue of food pyramids in public schools, even though nutritionists now advise against massive carbohydrate consumption. The government also told us the Vietnam War was justified and proper, until the Pentagon Papers said otherwise. The government told us Saddam had weapons of mass destruction, which were never located. Thus, to say the scanners are safe because the government says so, is not reason enough for many people, and understandably so.

The government also says TSA employees are well-trained and are not molesting people. However, individual experiences indicate otherwise. One TSA employee, Sean Shanahan, was charged with multiple counts of child rape recently.  Specifically, he was charged with two counts of statutory rape, two counts of enticing a minor and one count of indecent assault and battery (more here). That these types of people are involved in screening and touching passengers is frightening, to say the least.

In another incident, a pilot’s  18-year-old daughter was chosen for a naked full-body scan. She told her father afterward that the screener said to his colleague through the headset, “We have a real beauty coming through.” One woman is now suing the TSA after they forced her to expose her breasts to the public by pulling her shirt down, and made jokes about it afterward. She alleges one male TSA employee told her he wished he was there when she came through the first time and that “he would just have to watch the video.” A flight attendant has also filed a claim of being groped by TSA.

Rosemary Fitzpatrick, a CNN employee,  felt violated by the new screening procedures, during which a screener ran her hands around her breasts, over her stomach, buttocks and her inner thighs, and touched her crotch. Ella Swift, a Grand Rapids airline passenger said the enhanced patdown she experienced was unnecessary, violative and painful. Yet another woman said that during the pat down, the employee touched her labia. Pilots unions are also outraged and have issued memos on TSA screening and reports of molestation. A bladder cancer survivor experienced a pat down during which the TSA agent broke the seal on his urostomy bag, and left him covered in his own urine.

There should be no question that TSA procedures border on sexual assault, if they don’t directly constitute molestation. Even so, proponents of such screenings argue this is “voluntary,” and that people are free to take buses and trains as alternative forms of transportation. First of all, many people have to travel to non-contiguous states or countries for work or to see family. Last time I checked, there was no train to Hawaii, Alaska, Puerto Rico, Asia or Europe. To say people must be endure x-rays, or be molested in order to work or see their family is hardly presenting them with voluntary choices.

If Wal-Mart decides to sell you a bicycle on unreasonable terms or for a terrible price, you can go to Target or some other store. This is a voluntary choice, because free markets allow vendors to compete and sell bikes on different terms, from which customers can choose. But what if Wal-Mart used force and lobbied for laws to shut down all the other bike vendors, and biking was the only way for you to get to work? Would the purchase of an overpriced bike on unreasonable terms from Wal-Mart seem very voluntary then?

Similarly, the airline industry is heavily controlled and regulated by government. If you find TSA’s demands unreasonable, you have nowhere to go, no other option to choose. The government has forcibly removed all options with their regulations, and imposed unavoidable rules.  If an individual refuses to undergo screening, they may not only be asked to leave the airport, but will be detained and questioned by TSA, and may face a $11,000 fine and possible arrest. How is this voluntary in any sense of the word?

There is one class of people for whom the screening procedures are indeed voluntary. Compared to the choice permitted this particular class of people, it is clear the “choices” presented to other members of the public are less than voluntary. Members of congress with security detail do not have to submit to these screening procedures.  They are exempt entirely, although I’m sure if they wanted to be x-rayed or molested, TSA would not deny them. This again demonstrates that government employees believe themselves to be above the laws and rules they force everyone else to abide by. America effectively operates on a caste system.

Even if one ignores the molestation, and continues to believe this is a “voluntary” choice, the whole premise of these procedures is dangerous and faulty. Presumably, the idea is to violate the person and freedom of all people on a purportedly minimal level, in order to secure greater security for society at large. Unless one subscribes to fascist ideology, this simply is not a tenable or desirable solution to the problem.

If we are to accept that molesting people and viewing them naked is acceptable to prevent terrorism, then we must accept that other such measures are justified and desirable to prevent similar ills in society. For instance – why don’t we force all men into jail for a brief detention to ensure they are not murderers or rapists?  Men commit almost all rapes, and are 8 times more likely to commit murder than women.  Under the exact same logic as terror-prevention, we should rigorously profile all men, detain them for a short period, to ensure they are not murderers or rapists, regardless of guilt or innocence. Arguably, if we did this, we would virtually eliminate all violent crimes and rape, and such a measure would further the safety and welfare of society. Like the case of TSA screening, a proponent could assert that the intrusion caused by brief imprisonment of innocent men would be far outweighed by the benefits of drastically reducing violent crime and rape.

This TSA screening relies on the exact same logic as the example of imprisoning all men. Both measures involve violation of the body, person and freedom of innocent people for a greater goal of safety.  One cannot logically believe one is justified, but not the other; there is absolutely no reasonable distinction between the two.

This is not a “slippery slope” argument.  It is not the case that TSA screening is a good thing, but could potentially lead to other bad things or eventually lead to worse results. There simply is no logical distinction between imprisoning all men for the goal of eliminating violence and molesting/x-raying all passengers for the sake of preventing terrorism.

The people who continue to support these bogus “security” measures must admit they support molestation in exchange for a vague and unsubstantiated goal of safety.  They must admit they agree with  forcing people to choose between x-rays, humiliation, sexual assault, or their families. They must admit they would agree with a policy of imprisoning completely innocent men to stamp out crime, if such a measure were ever proposed. If they are unable to do so, it’s likely because they blindly bought into hatred and fear of Muslims and the government’s fear tactics, because there is nothing else that would logically explain support of these measures.