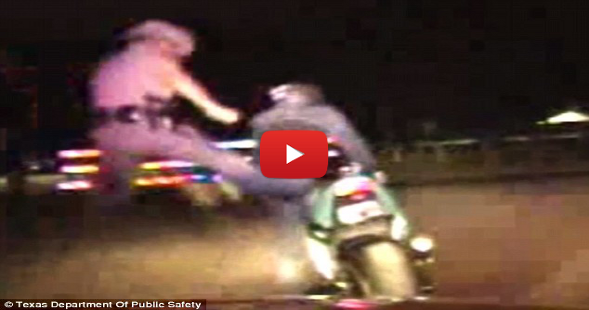 Earlier this week, video was released of a 2012 high-speed chase involving a motorcyclist that had run a a stop sign and then refused to stop, when a Texas Department of Public Safety trooper, who was camped at that stop sign waiting to generate some revenue for the state, tried to pull him over.

The part where it gets interesting is when Trooper Abraham Martinez protects the public’s safety by firing four gunshots at Steven Gaydos through the window of his police cruiser as they are riding down a busy highway. Then at the end, as Gaydos (who had been hit in the thigh by one of those earlier gunshots) can be seen clearly surrendering, but apparently not quick enough for Martinez, who runs up and kicks him off the bike.

Via the Daily Mail:

Dashcam footage has revealed the startling moment a Texas trooper ran toward a motorcyclist following a high-speed chase, leaped into the air and karate kicked him to the ground. The unconventional maneuver led to a three-day, unpaid suspension for Trooper Abraham Martinez last year but the footage only emerged this week as the Austin American Statesman investigated outdated tactics used in Department of Public Safety pursuits.

The incident unfolded in December 2012 after Martinez, a 10-year veteran trooper, took chase when 25-year-old Steven Gaydos ran a stop sign near Houston.

Gaydos knew he was being pursued but drove off because he was driving on a suspended license.

‘I took off, thinking I could easily lose him,’ he said in a later interview.

But troopers followed Gaydos for nearly 40 miles at speeds of 130 mph before Martinez pulled alongside him and fired four times through the window of his moving car, striking the man once in the thigh.

The motorcyclist then raised his hand and pulled over and, as he tried to put down his kickstand, Martinez suddenly leaped out at him, kicked him and knocked him to the ground.

Gaydos was arrested for evading law enforcement, driving with an invalid license and possessing a prescription painkiller after he was found to be carrying two Percocet pills.

The Statesman reported that the kick and shooting from a moving vehicle don’t specifically violate the Texas Department of Public Safety rules for high-speed chases, but experts said that shooting at fleeing suspects was an area of the policy that needed updating.

After the incident, Martinez said he pulled out his weapon to avoid harm coming to anyone else on the road and only intended to shoot Gaydos’ tires. He did not strike the bike with any of the bullets.

‘I knew that it was necessary to terminate the pursuit in order to avoid any more injuries or serious bodily injuries, possibly even deaths from happening,’ he said in an interview with a supervisor.

As for the kick, ‘obviously we don’t teach that,’ he said. ‘I think it’s something that just comes natural to some of us.’

He said he opted for the unusual move because experience taught him to act decisively in case the suspect was armed.

In February 2013, a grand jury declined to indict Martinez for the shooting but he was eventually ordered to take three days off last summer for violating DPS policy by using force inconsistent with his training, the Statesman reported.