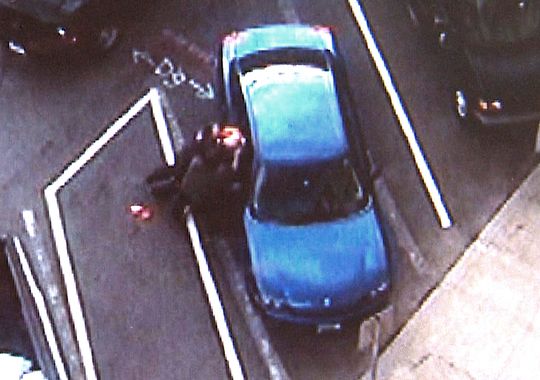 Just two weeks ago, a sheriff’s deputy from Hunt County, Texas (just outside of Dallas) was caught on video punching a pregnant woman in the back while she was handcuffed. Now another video (embedded below) shows two more deputies beating a handcuffed man for the horrible crime of talking to another prisoner at the county jail.

This time, Jailer Joshua Richardson and Deputy Stuart Roberts dragged inmate Phillip Allen Jones outside, slammed his head into a car at least twice, and then both deputies knocked him to the ground. All of this occurred while Jones was prevented from even defending himself, by having his hands shackled.

According to WFAA 8, a CBS affiliate in Dallas-Fort Worth:

“The Hunt County Sheriff’s Office faces new allegations of police brutality with the emergence of courthouse surveillance video showing a handcuffed and shackled prisoner being manhandled, slammed head-first twice into a car, and then taken to the ground.

This comes just days after a video emerged on social media of a Hunt County deputy hitting a pregnant woman in the back.

‘It appears there’s a pattern of attacking people that are handcuffed,’ said Scott Palmer, a Dallas civil rights attorney who represents the prisoner in the latest video. ‘This is bad. You don’t this to handcuffed people…’

Jones, 28, is facing the wall. A man standing in the lobby recognizes Jones and says something to him from across the lobby. Jones replies…

Jailer Joshua Richardson, 31, tells the two men not to speak to one other. He escorts the man out of the courthouse. He returns and paces around the lobby. He is seen cracking both of his knuckles in apparent agitation.

Richardson, a square, beefy man, then rushes aggressively toward the slender Jones. Richardson grabs him, dragging the shackled prisoner down the hall.

All three fall in a tangled mess on the ground. By then, Jones’ pants are outside his ankles.

‘It shows a vicious attack on a very vulnerable human being for doing nothing other than talking to somebody that walked by,’ Palmer said… And of course, just like when they punched a handcuffed, pregnant woman in the back, deputies charged Jones with “assault on a public servant.” They also falsified police reports, claiming Jones had attacked them, and subsequently refused to provide proper medical care, instead leaving him handcuffed for 24 hours.

Also, much like the previous incident, where his deputies attacked Deanna Robinson while she was handcuffed and pregnant, Sheriff Randy Meeks pretended to be conducting an investigation of there actions. However, unlike in Robinson’s case, when he just relied on the familiar police standby of claiming she was reaching for the gun belonging to the deputy who was punching her in the back, he decided just to say he would review the incident and get back to WFAA’s reporter. Then, he never actually did get back to them.

Seems to be a bit of a pattern here both of sheriff’s deputies in Hunt County, Texas punching people that not only aren’t, but actually couldn’t be a threat to them (because they are handcuffed and/or pregnant at the time the deputies attacked them) and of Sheriff Meeks not really wanting to hold anyone accountable for that, even when it’s captured on video for the whole world to see.