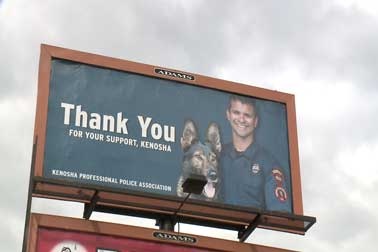 This story is just as outrageous as the events that lead up to it. Pablo Torres is a Kenosha, WI police officer who killed two people within ten days according to On his first day back from a mandatory leave for shooting and wounding a knife-wielding man earlier this month, a Wisconsin police officer shot and killed an armed suspect after confronting him following a chase, authorities said.

Kenosha police officer Pablo Torres returned from leave Saturday, 10 days after shooting a man who advanced on police armed with knives, the department said. While that March 4 shooting was investigated, Torres was placed on administrative leave by department policy in police-involved shootings. He also attended annual in-service training before returning to work last weekend, police said.

On Saturday morning, police chased a car driven by 26-year-old Aaron Siler, who was wanted on a felony probation and parole warrant, Lt. Brad Hetlet said in a statement. Siler crashed at around 9:30 a.m. and took off running.

When Torres confronted Siler, Siler “armed himself with a weapon” and Torres fatally shot him, Hetlet said.

Torres was interviewed Tuesday by the Wisconsin Department of Justice, Hetlet told the Kenosha News. The department’s Division of Criminal Investigation will lead the inquiry in the shooting of Siler.

Like most egregious acts by police officers this one has been tabled while the internal investigation plays out, which is also code for, “once the media dies down we’ll clear this officer of all wrong doing.” Or atleast that’s what the Kenosha Police Department was hoping until a billboard with Killer Cop Pablo Torres popped up in Kenosha and the family of Aaron Siler is taking offense to the billboard. According to WISN 12:

A billboard featuring a police officer is creating controversy in Kenosha. It shows Kenosha Officer Pablo Torres with the words “Thank you for your support, Kenosha.”

Torres is the same officer who was involved in two shootings in 10 days. One of the men he shot, 26-year-old Aaron Siler, died.

Siler’s family called the billboard a slap in the face.

The Kenosha Police Association is behind the billboard.

It released a statement saying: “The recent incidents in the community have greatly impacted many people including the officer, his family and the entire police department. We have been humbled by the outpouring of support the community has given us and we wanted to simply say thank you for that support.”

How gross is this? Even if that was the case, that the Police Association is ‘humbled by the outpouring of support’, couldn’t they have thought of a better way to show their gratitude? They could have sent thank you cards to their supporters, hosted a dinner and/or thanked them personally via phone or email. Yet, for what seems to be an obvious reason – intimidation – they choose to put up a billboard on the same road the victims family has to travel on every day. This is nearly as sick as the Cleveland Police sitting outside the memorial of Tamir Rice, see here.

This is is absolutely disgusting and I wanted to link you to their website and Facebook page, as well as provide a phone number, but neither seems too active. I would suggest the Facebook page first or consider calling the Kenosha Police Department to tell them to stop protecting killer cops (phone: 262.656.1234).