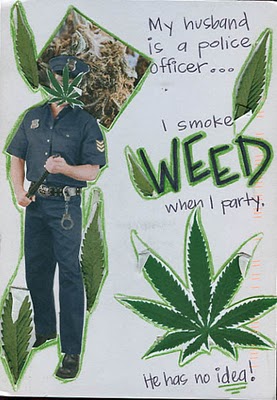 NOTE: Names have been changed to protect the identities and legal situations of the people involved.

I first met Joe during my sophomore year in college. We became fast friends, hanging out whenever we weren’t in class or at the library, and eventually became roommates the next year. Joe was always a pretty quiet and shy guy, but we got to know each other quite well over time and he gradually opened up more around me. I always knew him as generally a good person who had some struggles with depression, but I never thought anything would happen anywhere near what happened the first semester of my junior year.

We were both avid pot smokers, and because we were unemployed at the time we sold small amounts of weed – nothing too significant, just enough to have some money in our pockets – on and off. One night I was driving back from the store with another friend of mine when Joe called. He said that someone had gone into the room and stolen all our weed and cash when he was outside smoking a cigarette and to get back to our building as soon as possible. When I got back, Joe told me he had a decent idea of who might have robbed us, so we went to talk to the guy. Dave, the guy we suspected of robbing us, didn’t take the accusation well at all; he started yelling and pushed Joe to the ground but we walked away before it got out of hand and that was it for a while. To this day neither Joe nor I know for sure if Dave robbed us or if it was someone else, but pretty soon I basically forgot about it and thought Joe did too because our weed man was a great guy – he was understanding of the situation and agreed to front out product with a small interest fee so we could stay in business.

A couple weeks later, I had just gotten back from class when I heard a knock on the door. I had a bad feeling right away so I looked through the peephole before answering, and sure enough, it was the cops. I stepped out into the hallway, locked the door behind me, and the cops started asking if they could come in. Knowing my rights, I told them they couldn’t come in without a warrant and I wouldn’t answer their questions without a lawyer present. They kept trying and failing, refusing to leave until they talked to Joe as well. Joe eventually got back from class and told the cops the same thing, that they couldn’t enter our room without a warrant. Everything was normal except for a higher level of caution for the next couple weeks, but the overall mood was one of triumph because we had successfully kept the cops at bay. But things started going to hell pretty soon afterwards. Joe apparently never completely got over the robbery and was completely convinced that Dave had masterminded the whole thing, so he went out in the middle of the night and did a number on Dave’s car with some rocks. This was the first of a long list of things he did that fucked things up for both of us.

A few days after the incident with Dave’s car, the dean of students came to our room accompanied by school security and a few cops. The dean produced an internal search warrant, the document required by the housing contract for school officials to enter residences. Luckily neither Joe nor I was selling at the time, but he admitted to having a small amount of pot. Once his bag was located, the cops took over. I didn’t have much of anything in the room – they charged me with paraphernalia, which I’ll quite possibly be able to fight successfully – but they found a few hundred dollars and a scale in Joe’s desk. Because the amount of pot found was so small, the cops were unable to find enough evidence to show intent, but Joe’s downward spiral went out of control after that night.

Almost immediately after the search warrant, I started noticing Joe’s depression getting worse. He bought a huge bottle of Klonopin (a benzodiazepine, or type of downer) and started binging on it. The only time he wasn’t on Klonopin was when he woke up in the morning, and the first thing he’d do was pop a couple pills before class. He started getting even quieter and more withdrawn than usual, not even saying all that much to me beyond how much he hated Dave and how pissed off he was that we got arrested. He eventually stopped going to class and sleeping more and more. He also started stealing around the same time the binge started. It got so bad that I couldn’t take him to the store without him shoplifting something, and his favorite activity at night became car shopping. He rarely took anything of value at first; I think the stealing was more a way for him to briefly escape the reality of the legal situation and school discipline hanging over our heads.

Unfortunately, his stealing quickly escalated to more expensive things in much riskier locations as the disciplinary hearings got closer. Shoplifting turned into car shopping, car shopping turned into stealing bagfuls of books from professors’ offices, and stealing books turned into full-on burglary. The last weekend before finals week, I woke up Saturday morning to a phone call from my friend Chris. Someone had gone into his room the night before and taken his laptop and Xbox, as well as other electronics belonging to his roommate. Chris and I both suspected Joe because of his recent actions, causing me to look through Joe’s stuff when he wasn’t around, but I didn’t find anything from Chris’s room. Sunday morning I woke up quite hung over and decided to run to the store. I walked out to my car to find that the driver’s seat had been moved up and there were boxes of various electronics and other valuables on all the other seats. I called Chris over to see if his stuff was in my car – it wasn’t – so I went back to the room and asked Joe if he knew anything about the stuff in my car. It turns out that on Saturday night, after I was in a deep drunken sleep, he had broken into a nearby building and used my car to bring back what he stole. We got the stuff out of my car and Joe stashed most of it in an abandoned warehouse while he figured out what to do with it. He brought a few of the smaller things that could be quickly sold back into the room, which ended up being the fatal mistake.

A few days later, I was in the library working on my final paper for a class. I realized I’d forgotten my notes from that class in my room so I packed up and started walking back to my building to grab them. While I was on my way, Joe texted me saying to stay away from the room because he had a girl over and that he’d text me again when she left. Not wanting to violate man law, I decided to write what I could without my notes and then head to the bar for a while so he could do his thing. Several hours went by without him texting me, so I assumed he forgot but just in case I waited a while longer before going back to the room. When I finally got back, I found out that there was no girl – Joe was lying in a pile of blood and vomit, barely conscious, with several cuts going up and down his forearms. He told me he’d tried to commit suicide and when I asked him why all he said was “shit sucks” and “I don’t want to live anymore.” I called 911 to get him to the hospital and the cops found a few things he’d taken from the building he robbed the previous weekend. They also searched my friend Steve’s room, not finding anything stolen (which they claimed they were looking for) but finding his drugs as well as some I’d stashed in there to keep them away from Joe. Joe later admitted from the hospital that he had stolen Chris’s laptop and Xbox and told us where we could find them and seemed to genuinely feel bad about everything he’d done – Steve and I went to visit him and the first thing he said was “I fucked everything up, didn’t I?” Joe and I both ended up being kicked out of school; the official reasons for his expulsion were the indicia of dealing found in the initial search of the room and the reasons for mine were accusations of selling harder drugs such as cocaine (which I don’t even use) and making a violent threat, both false.

School situations aside, I firmly believe that if it weren’t for drug prohibition – especially cannabis prohibition – Joe would not have attempted suicide. I also believe that he wouldn’t have smashed up Dave’s car, robbed Chris, or broken into that building. Obviously he would have suffered from depression regardless of any law or lack thereof, but every one of the events that led to his downward spiral and eventual suicide attempt was made possible by prohibition. Whoever robbed us when we were selling – whether it was Dave or someone else – was in all likelihood another dealer looking to make some extra money. If not for prohibition, it would have been more like having a case of beer stolen and even if we had lost a lot of cash we would have had the option of trying to get it back through legal channels. Certainly not motivation to smash up a car. If not for prohibition, the tip that led to the room being searched wouldn’t have happened. Even if the cops had searched our room based on accusations of violence or violent threats, they wouldn’t have assumed “well, they have drugs so it’s probably true” and they would have realized that there was nothing more dangerous than a Swiss Army knife. There wouldn’t have been any charges, no reason for the school to discipline us, and no reason to send a mentally unstable person deeper into his depression, changing his drug habits and turning to stealing in search of a way out. If not for prohibition, we would still be in school. Joe would still be the quiet and shy guy he is, he still would have battled depression, but he wouldn’t have started stealing and his arms would be minus about 30 scars. Sad to think that compared to the other lives ruined or even ended by the war on drugs he’s one of the lucky ones.

Send your stories (or videos) about police abuse, police issues and/or suggestions on improving police tactics to CopBlock.org, via the submission tab.