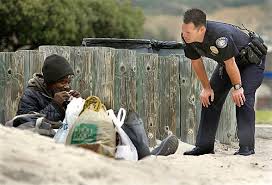 A story out of Montreal Canada has two interesting angles. First being, that police officers decided to dress up like homeless people in order to catch people, who were texting while driving, not wearing seat belts, or committing other minor vehicle infractions (basically revenue generation at its finest). The second part, is that people started to report this, prompting news outlets to seek comment from the police. The Police then admitted it was a poor way to go about enforcing such violations (or as a means of generating revenue). From CJAD 800 AM:

Montreal police are confirming reports from motorists who say they saw cops disguised as panhandlers Tuesday during a police operation to catch texting drivers.

Francesco, who preferred not to give his last name, said he couldn’t believe it when a homeless-looking man wearing his hair in a white ponytail begging with a cup on Langelier near Jean Talon in St. Leonard, poked his head inside his car. The man then revealed himself to be a police officer who ended up giving him two tickets for a seatbelt infraction and later a jaywalking violation.

Francesco said he was a little freaked out at the time and got angry later on when he found out it was a cop in disguise.

“It’s invasion of privacy. He had no reason to put his head into my vehicle just to see if I had my seatbelt on and I had my seatbelt on,” Francesco told CJAD 800 News. “For me it was really unfair. Unfair. That is some kind of disguise that is unacceptable. People get scared.”

Police Commander Ian Lafrenière said it was the first – and last – such strategy by officers in the east section of the city. A similar operation was conducted on Beaubien near the Galeries d’Anjou.

“It was an initiative from them because they feel it was the only way to catch people with their bad habits. But that being said, we do understand the initiative but not this way,” said Lafrenière.

“The officers had no bad intentions with this, it was an intention to catch people with bad habits. That being said: good idea, not the right way to do it.”

Lafreniere said they are not ruling out police dressing as regular civilians for other such police operations.

How come you never see police officers in ‘America’ admit to mistakes? Aside from police dressing up like prostitutes and drug dealers (or buyers) the USSA also conducts warrantless checkpoints with an endless amount of vehicle infractions to stop or ticket motorists. The USSA police would never say that dressing a cop up like a hooker and entrapping people is wrong, they’d say you shouldn’t be breaking the law (even though they technically were too). Welcome to what a police state looks like.