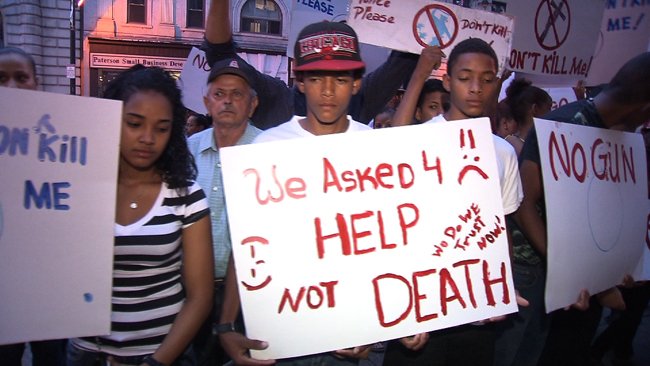 A federal judge has ruled that a Paterson, New Jersey police officer must face civil claims in regards to a 2012 incident in which he broke down a man’s bedroom door and shot him in the head for refusing to drop a hammer.

According to court documents, Dominican Republic transplant Saulo Del Rosario, had been treated and prescribed medication for seizures at St. Joseph’s Hospital in Paterson on July 6.

Family members say they were concerned for Rosario’s well-being after he locked himself in his bedroom on the night of Aug. 31, and refused to come out the next morning.

Rosario’s son, Honey, had an English-speaking friend call 911, as the mans doctors said to do in case his symptoms returned or worsened.

Court documents say the 911 operator erroneously designated the call as an “EDP,” or emotionally disturbed person.

After Paterson police arrived, Rosario’s sister Marta allegedly told the officers she was worried her brother had had a convulsion as he had not taken his medication that morning.

When Rosario didn’t respond after officers tried to speak with him through the door, police removed the family from the home and positioned themselves outside the bedroom window, court documents say. While in transition, other officers kicked open Rosario’s bedroom door open and found him holding a hammer.

Family members say despite the fact that the officers were holding a riot shield designed to protect up to three people from gunshots, shielded Officer Marj Kush fired two shots at Rosario after he refused follow commands to drop the hammer.

Court documents say Rosario was hit once in the mouth. He was later pronounced dead from a “gunshot wound of head” at St. Joseph’s Hospital.

Court filings were made by the family against the city of Paterson, its police department, Officer Kush, five other named officers, and 30 other anonymous supervisory officials, officers, and entities.

The city and department moved to dismiss the filings for ‘failure to state a claim,’ but U.S. District Judge William Martini preserved the claims against Kush last week.

“Plaintiffs plausibly allege that firing a gun into [Rosario ‘s] head was a breach of Marj Kush’s duty of care, resulting in [the mans] death,” the unpublished April 16 ruling states. “The complaint plausibly alleges each element of an [intentional infliction of emotional distress] claim against Marj Kush.”

The family was instructed by the court to file amended claims in the proceedings against the other officers and officials involved within 30 days of the ruling.