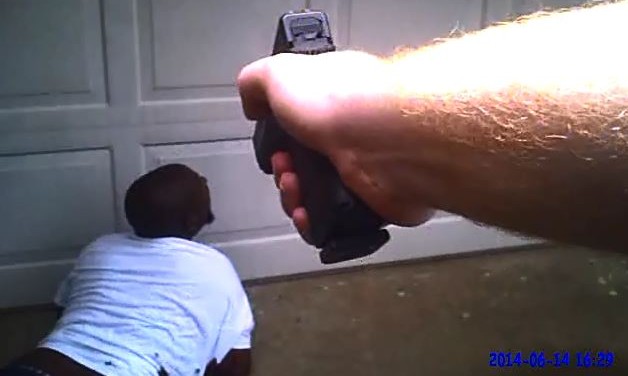 Family say 28-year-old Jason Harrison, who suffered from bipolar disorder and schizophrenia, was in need of ‘mental help’ when his mother called police after he began making ‘violent threats.’

Body cam footage shows Dallas police employees knocking on the door of Harrison’s residence before speaking with the man’s mother who can be heard informing the officers of her sons medical conditions.

Harrison’s family attorney Geoff Henley, said the video is an example what not to do when dealing with a mentally ill individual.

I believe most people agree with Henley’s assessment, especially after viewing the video, that these officers used an unnecessary amount of force in a situation where they were called to help Jason Harrison. Instead they shot him dead and claimed he lunged at him, which the video proves, and now a grand jury has cleared them of any wrong doing. According to Revolution News: Harrison’s family (who called the police for help) is disappointed and frustrated. Harrison’s brother says the family hopes this case will initiate change in the way deadly officer-involved shootings are handled. The City is currently defending the civil lawsuit filed by the Harrison family.

The family of the victim released the footage from an officer’s body camera to the public in march.

38-year-old Jason Harrison suffered from bipolar disorder and schizophrenia, and his mother had called for help in taking him to the local hospital after he had stopped taking his medication.

In the released video, Harrison’s mother answers the door calmly and Harrison comes along behind her, holding a screwdriver. Harrison’s mother can be heard telling the officers that Jason is bi-polar schizo as she walks out the door and past them. The officers, who appear in the video, demand that he drop the tool and seconds later fire several shots.

“It was the most heartbreaking experience in my life,” said his mother, Shirley Harrison, of the incident. “To stand there helpless, he’s helpless. I couldn’t help him. To be gunned down right before my eyes.”

This is just another example of the system protecting its own. Grand juries are a joke, the evidence is controlled and the people selected are likely to be in favor of police, so the outcome of clearing officers of wrongdoing is common. It’s clear to everyone that these officers overreacted to this situation, by choosing to use deadly force too soon, and instead of owning that mistake they’re justifying it via a flawed justice system. There are some serious questions to be asked when a call for assistance results in death and is justified. At what point are people going to be willing to say the police have gone too far?

Seems ‘American’ police need to take a lesson from the Switzerland police who were visiting NYC and were able to subdue a fight on the subway without a gun, taser or using excessive force on anyone – see video.

The opposite results of these two cases highlights the problems we face with policing here today. It’s time we start asking questions, demanding accountability and seeking alternatives to government policing. There clearly are better ways, as demonstrated by the Swiss Police.